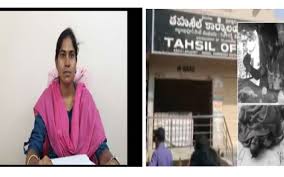 Hyderabad, Nov.4 (PMI): In a mind-numbing incident, a woman Tahsildar working in Abdullapurmet Tahsil office in Hayathnagar of Ranga Reddy was set ablaze by a farmer on Monday afternoon during lunch recess. The culprit and two other employees in the office also sustained severe burns.
Speaking to mediapersons in the evening, Rachakonda Police Commissioner Mahesh Bhagwat said they suspect that accused Koora Suresh of Gowrelli village resorted to the gory crime of burning alive of Tahsildar Vijaya Reddy over a land dispute. The CP said the accused owns seven acre land in Bacharam village which was under litigation. He said the accused, who set the official ablaze with petrol during lunch recess, also suffered burns and was admitted to the hospital.
The CP said the control room received the information in the afternoon. At the same time, an employee in the Tahsil office with burns came to the police station and narrated the incident. He was immediately taken to the hospital. Later, the police inspected the place of offence and learnt that the accused and his brother have seven acre land in Bacharam village and a dispute was going on and a case was pending in the High Court. The CP said the accused Suresh went to the Tahsildar office on Monday afternoon with an intention to murder the Tahsildar and executed his plan by pouring kerosene on the victim and set her aflame. The accused also suffered 60% burns and was under medical treatment. 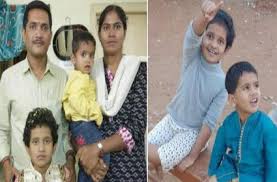 “After speaking with her for a few minutes, Suresh doused the Tahsildar with fuel and set her ablaze before walking out. Two of the employees—an attender and driver of the lady officer, rushed inside and tried to save her. However, she ran onto the verandah in the building and collapsed before dying on the spot,” said the Commissioner. He said Suresh was spotted near the Hayathnagar police station with burn injuries on his hands and when questioned by the police, he said injustice was meted out to him in a land issue.
Soon after the incident, Revenue department employees gathered in large numbers at the Tahsildar office and staged a protest demanding stringent action. They also demanded protection to the Tahsildar office. Senior officials of the Revenue department also visited the spot. Revenue Minister P. Sabitha Indra Reddy, condemned the incident and said the government would take steps to prevent such incidents in future.
According to the police, victim Vijaya Reddy, as usual, came to her office in the morning and discharging her duties. At around 1.20 pm, accused Suresh of Gowrelli village entered the

Tahsildar’s chamber and spoke to her for half-an-hour. All of a sudden, the staff in the office heard shrieks of Vijaya Reddy and rushed to her rescue. But the Tahsildar in flames came out of the room and fell on the floor.
Two of the employees tried their best to protect her, but she died on the spot. In the process, the accused and the two staffers also suffered injuries. The police rushed the injured employees to the hospital and sent the body to the Osmania General Hospital for post mortem.