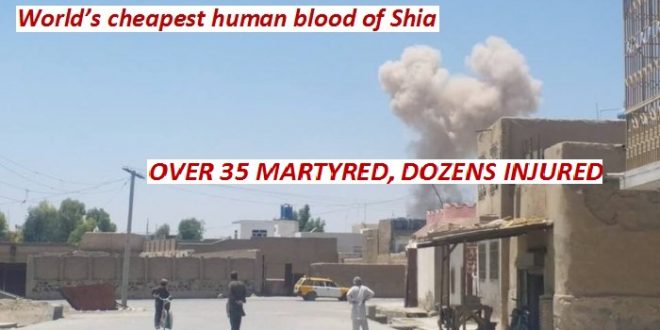 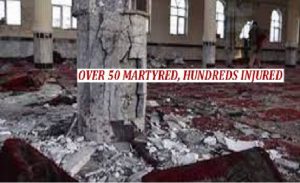 KANDAHAR/ KABUL/ ISLAMABAD: Shia’s blood had not only been declared the “world most cheapest human blood but neither the American, African, European, Asian and Australian regimes could accept this reality yet nor believe that dozens of terrorist organizations including Daesh, ISIS, ISIL, IS, Boko Haram, Taliban (both TTP & TTA) etc are created just against Shia Muslims and they have been achieving their targets well during the last several decades especially since Afghan Jihad in 1979, sources claimed.

At least 35 people have been killed and 45 others wounded after an explosion went off inside a Shia mosque in Afghanistan’s southern city of Kandahar, according to public health officials in the province.

The explosion on Friday afternoon took place in the Bibi Fatima-SA Mosque, the largest mosque for Shia worshippers in the city.

Interior ministry spokesman Qari Sayed Khosti said on Twitter: “We are saddened to learn that an explosion took place in a mosque of the Shia brotherhood in the first district of Kandahar city in which a number of our compatriots were martyred and wounded.” 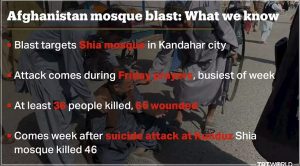 s arrived in the area “to determine the nature of the incident and bring the perpetrators to justice”, he added.

An eyewitness told media, he heard three blasts, one at the main door of the mosque, another at a southern area, and a third where worshippers wash themselves.

Hospital sources told PMI they were inundated with patients, and that based on the number of increasing intakes, they feared a high casualty toll.

There was no immediate claim of responsibility.

Photographs posted by journalists on social media showed many people apparently dead or seriously wounded on the bloody floor of the mosque.

The incident took place a week after dozens of people were killed and more than 100 others were wounded when a mosque in the northern province of Kunduz was targeted in an ISIL-K claimed bombing.

The Taliban-led government promised a quick response and to hold the perpetrators for the Kunduz attack responsible.