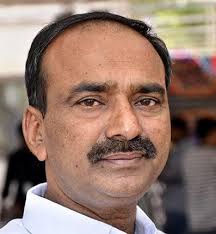 Hyderabad, May 13 (PMI): Finance Minister Etala Rajender today lambasted at the BJP for its remarks against Rythu Bandhu scheme and warned that tongues of such leaders will be cut off.

Talking to media persons at Karimnagar after participating in cheques and passbooks distribution to the farmers program, Eatala condemned the comments of BJP leader that the farmers were drinking beer after taking Rythu Bandhu cheques. “How dare you to make such false and provocative comments against the farmers?” he warned. “Tongues of mannerless leaders will be slashed if they failed to mend their ways of insulting the farmers, the Finance Minister thundered.

“Rythu Bandhu scheme is unique in the country and no other State had any idea of such a welfare program for the farmers”, he said. Chief Minister K Chandrasekhar Rao is a farmer and aware of the difficulties of the farming and investment and came up with crop investment scheme. A staggering amount of Rs 12,000 crore was being spent by KCR Government for the welfare of the farmers through crop investment and the Telangana State set an example and shown a path to the nation in extending succor to the farmers, he said.

“This help will go a long for the farmers to avoid taking loans from money lenders and focus on golden harvest. The previous Congress regime had looted public money in most of the fields. However, the TRS Government has waived off Rs 17.000-crore crop loans, cancelled water cess for the farmers and giving 24 hour power to farm sector. Since the banks were not giving loans and causing inconvenience, the State government has taken a decision to provide cheques to the farmers towards crop investment”, he said.

However, the comments of the BJP and the Congress are only to make political mileage by mud-slinging, he charged. Despite such heinous remarks, the government would not refrain from conceiving and implementing welfare schemes for all sections of people, Rajender said. (PMI)