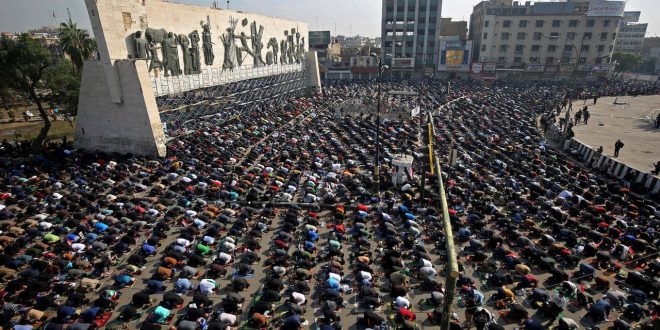 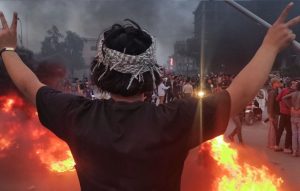 NASIRIYA/ BAGHDAD: The death toll from clashes among rival protesters in Iraq’s southern hot spot of Nasiriya rose eight while over 33 injured, medics told media on Saturday, as other cities imposed security measures.

Violence erupted on Friday between the dwindling members of the October 2019 anti-government protest movement and supporters of populist Shia leader Muqtada al-Sadr, who had called on his followers to take to the streets in a show of force.

In the southern city of Nasiriya, anti-government activists accused Sadrists of shooting at them and torching their tents in their main gathering place of Habboubi Square.

“Another massacre took place today … against the peaceful protesters using live ammunition. We ask the Sadrist 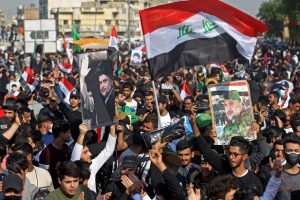 Clashes continued into the night, with medics reporting a total of six dead by Saturday morning – five of them from bullet wounds – and at least 60 wounded but on Saturday morning, anti-government protesters were already back in the square to rebuild their camp, an AFP reporter said.

Authorities sacked the city’s police chief, launched an investigation into the events and imposed an overnight curfew in Nasiriya. 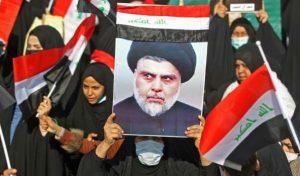 Earlier on Friday, thousands of Sadrists gathered in Tahrir Square in Baghdad and in other southern provinces to show support for the influential religious leader ahead of the election scheduled for June next year.

Al-Sadr, who leads the largest bloc in Iraq’s parliament, said he expects his movement to win a majority of seats.

A longtime adversary of the United States, he also opposes Iranian influence in Iraq.

Nasiriya was a crucial hub for the protest movement that erupted in October 2019 against a government seen by demonstrators as corrupt, inept and beholden to neighboring Iran.

It was also the site of one of the bloodiest incidents of the uprising, when more than three dozen died in protest- 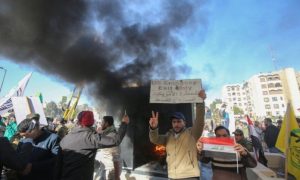 The deaths sparked outrage across Iraq and prompted the resignation of then-Prime Minister Adel Abdel Mahdi.

The anti-government protests broke out in October 2019 and continued for several months, with hundreds of thousands of Iraqis demanding jobs, services and the removal of the ruling elite. Nearly 500 people were killed.

Mahdi’s successor, Mustafa al-Kadhimi, has sought to reach out to protesters and set June 2021 as a date for early elections – a major demand of the youth-dominated movement. (Int’l News Desk)