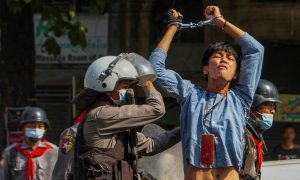 NAYPYIDAW/ MYANMAR: As many as 18 people have been killed and dozens wounded across Myanmar in the most violent crackdown yet by security forces against peaceful demonstrators protesting against a February 1 military coup, according to the United Nations human rights office.

“Throughout the day, in several locations throughout the country, police and military forces have confronted peaceful demonstrations, using lethal force and less-than-lethal force that – according to credible information received by the UN Human Rights Office – has left at least 18 people dead and over 30 wounded,” the office said on Sunday.

Police were out in force early and opened fire in different parts of Yangon after stun grenades, tear gas and shots in the air failed to break up crowds in Myanmar’s largest city. Soldiers also reinforced police.

The Myanmar Now media group posted a video of a wounded man lying on the street near the Hledan Centre intersection in Yangon, and said he had been “shot in his chest area by what appeared to be live ammunition”.

A man who witnessed the shooting told the Frontier Magazine that the police had fired live rounds at protesters sheltering at a bus station and that “one person died and others are wounded”.

A doctor at the hospital the man was taken to confirmed his death to Reuters news agency.

An emergency services charity reported two dead in the central town of Bago. Ambulance driver Than Lwin Oo told AFP news agency he had sent the bodies of the 18-year-olds to the mortuary at Bago’s main hospital.

The deaths were confirmed by media based in the town.

The Irrawaddy online media outlet reported one person had been killed in a protest in the second city of Mandalay.

Police broke up protests in other towns including Lashio in the northeast and Myeik in the deep south, residents and media reported.

A woman also died of a suspected heart attack after police broke up a teachers’ protest with stun grenades in the main city of Yangon, her daughter and a colleague said.

“We strongly condemn the escalating violence against protests in Myanmar and call on the military to immediately halt the use of force against peaceful protesters,” Ravina Shamdasani, spokeswoman for the UN human rights office, said in a statement.

Sunday’s police action came after state television announced that Myanmar’s envoy to the United Nations, Kyaw Moe Tun, had been fired for betraying the country after he urged the global body to use “any means necessary” to reverse the February 1 coup that deposed elected leader Aung San Suu Kyi. (Int’l Monitoring Desk)