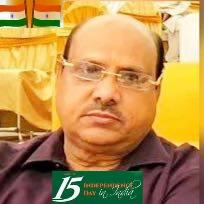 Doors of Majalis-e-Imam Hussain are open

Hyderabad, 22nd October 2018, (Press Media of India).  The city of Hyderabad is well known around the world for its Azadri (mourning during the holy month of Moharram) to mark the matrydom of Imam Hussain (A.S) the grandson of Prophet Mohammed (S.A.W.S). Thousands of Majalises are conducted by the Shia Muslims during the span of 68 days throughout day and night which are well attended by people from all walks of life irrespective of caste, creed, religion and sect.  The elegance of Azadari is where substantial number of Majalises are conducted by non Shia’s people belonging to Hinduism, Sunni Muslim sects etc. and participated by people irrespective of religions and sects.

In a press release President, Markazi Anjuman Matami Grouhan, Hyderabad, T.S, Mr. Syed Najaf Ali Shoukat (Senior Journalist)  said that the demand by the Sunni Ulema during their meeting with police commissioner in the old city to depute intelligence officers to monitor the majalis-e- Imam Hussain and restrict the loud speakers contradict their own demands. He said that Majalise are held in open doors and people from all walks of life are welcomed to mourn and grief the tragedy of Karbala. The Majalises are held in loudspeakers and nothing is hidden from the public view. The Shia Community has never used the Majlis-e-Imam Hussain as political platform, nor utilized it to infuse Anti National agenda, to sow communal hatred or sectarian slur as Shia’s are peace loving and patriotic community.

Further welcoming their demand to depute intelligence officers (SB, IB or any other agencies) to cover the Majlis-e-Imam Hussain, Mr. Shoukat said that the majalises of the Shia’s are held in Ashoor Khana’s, Azakhana’s, open grounds and residences and its doors are open to all people irrespective of caste, creed, religion and sect. Only the tragedy of Karbala and the Fazaelae Ahlaebait are narrated in the Majalises. No political and sectarian views are narrated and almost all the Majalises are conducted on loud speakers and there is nothing to hide from the intelligence community or fellow citizens.

Mr. Shoukat further condemned the demand from the Sunni Ulema to restrict the time limit to conduct the Majalises as they are held in different residences at various times diverse areas by people belonging to all communities.

He thanked the police department for their exceptional role in maintaining the law and order and handling the recent sectarian tension created by the few anti social individuals.(PMI)