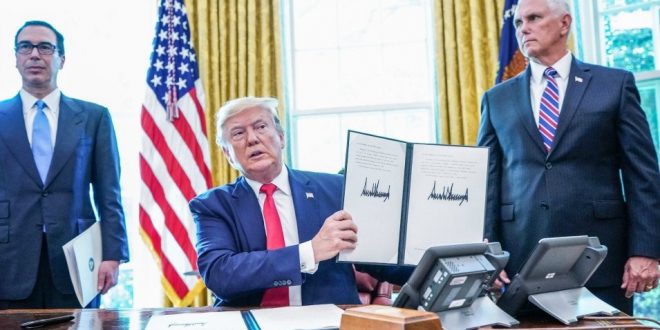 WASHINGTON/ TEHRAN: The Trump administration targeted Iran’s supreme leader with new sanctions on Monday, using one of the few tools available to punish Iran for downing a U.S. drone after President Trump took military strikes off the table last week.

Trump warned that his “restraint” might not last, but he appeared to muddy his own tough message with a vague threat to end U.S. protection for international shipping in the vital Strait of Hormuz, off Iran.

The U.S. economic penalties are part of Trump’s strategy to drive a weakened Iran to the bargaining table for new talks over its nuclear ambitions. The sanctions were announced as Secretary of State Mike Pompeo began recruiting allies, including Saudi Arabia and the United Arab Emirates, to help monitor threats from Iran in the Persian Gulf. 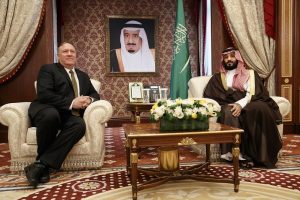 It is far from clear that Iran will buckle. Iran’s U.N. ambassador said Monday that any thought of negotiation is “not ready yet.” He also disputed claims that Iran was behind a recent string of attacks on oil tankers and other provocations against nations operating in the region, including the United States.

The measures mean that any foreign financial institutions that provide significant “financial services” to any of the Iranian officials would be subject to U.S. penalties.

“The assets of Ayatollah Khamenei and his office will not be spared from the sanctions,” Trump said. The president mispronounced the Iranian clerical leader’s name as “Khomeini,” which was the name of the former leader who died in 1989.

The decision to target Khamenei directly suggests that Trump is attempting to turn up pressure on the leader who would decide whether to accept an invitation to new negotiations over Iran’s nuclear program. Trump’s titular counterpart is President Hassan Rouhani, who presided over the 2015 international nuclear dealthat Trump rejects as flawed and weak.

Trump withdrew the United States from the pact last year and began increasing sanctions in a campaign his critics say is aimed at further undermining the nuclear deal and forcing the regime’s collapse.

“The supreme leader of Iran is the one who ultimately is responsible for the hostile conduct of the regime,” Trump said as he signed an order imposing the sanctions, which come atop dozens of previous economic penalties applied over Iran’s alleged support for terrorism and other actions. 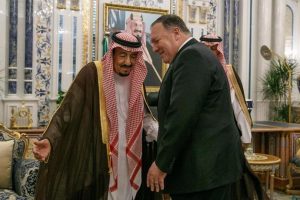 “He’s respected within his country. His office oversees the regime’s most brutal instruments, including the Islamic Revolutionary Guard Corps,” the president said, which the United States blames for an attack on two tankers near the Strait of Hormuz on June 13.

Trump appears to be gambling that the pressure campaign will compel Iran’s leadership to agree to a new nuclear agreement and not prompt it to lash out militarily for what it views as an illegal effort to strangle Iran’s economy but analysts said the United States is reaching a point of diminishing returns when it comes to sanctions pressure.

“The entities that Khamenei’s office controls have already been subject to U.S. sanctions,” said Suzanne Maloney, an Iran scholar at the Brookings Institution. “Any new measures are only incremental and possibly redundant. The Iranian economy has already been forced to become more insular and less interconnected — which leaves the residual economic activity paradoxically more resilient to U.S. restrictions.”

Beginning last year, when Trump withdrew from the nuclear deal, his administration has effectively banned Iranian oil exports, the country’s main revenue source, and moved onto smaller targets such as the iron, steel, aluminum and copper industries.

“Further economic sanctions are almost entirely symbolic, rather than being economically significant,” said Elizabeth Rosenberg, a sanctions expert at the Center for a New American Security. “Sanctions at this point are a sideshow to the real threat of military escalation and all-out war.”

Despite his aversion to a military strike, Trump said he has legal authority to order such an action without congressional approval, something some lawmakers have insisted he obtain. “I do like keeping them abreast, but I don’t have to do it legally,” he said in an interview with the Hill on Monday.