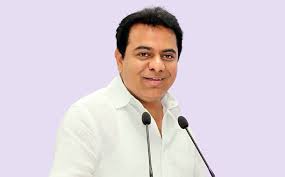 IT & Industries Minister K T Rama Rao on Sunday urged the Union government to declare broadband services as utility on the lines of power and telephone services. He wanted the Centre to make it mandatory for builders to lay ducts for broadband cables in all buildings for obtaining clearance or completion certificate which would pave the way for an unprecedented and exponential increase in broadband penetration in the country.

In a letter to Union Minister for Telecommunications Manoj Sinha, KTR urged the former to pursue the proposal with the Union Ministry of Urban Development. More and more people in the country have started to depend on broadband for sharing of information, for communication, and for viewing of media content, including news channels. The access to Internet, through PC, Laptop, Mobile, Smart TV, has now become an extremely important tool to bridge the gap between the privileged and underprivileged in our country.

He observed that though mobile and wireless internet connectivity was catching up, broadband had become a basic necessity in the country, especially due to its high speed connectivity, reliability and security when compared to mobile or wireless internet services. “Internet has become an important tool to bridge the gap between the privileged and underprivileged. It is not only a medium for citizens to exercise their rights, avail basic services and obtain vital information, but also a tool for the government to deliver better services,” he added.

Appreciating the BharatNet initiative undertaken by the Centre, KTR said Telangana State created Telangana Fiber Grid Corporation Limited to build a broadband network reaching every home, government office and institution. He extended support to the decision of Telecom Commission, which cleared TRAI’s recommendation that mandates every building plan to have a broadband cable duct, and that a completion certificate to the building should only be given if it has incorporated such duct in the building. “Optic fiber to every home is one of the most preferred choices in the country to deliver broadband, cable TV and voice to each and every home,” he added.

Rama Rao also pointed out that as the country-wide implementation of a broadband network was complicated, making it mandatory for laying ducts for broadband in all buildings will solve several challenges to reach every citizen. “We request your intervention in directing Ministry of Urban  Development to give similar directive to all State Governments to implement and make broadband as a utility and make it as a part of conduct to give clearance /completion certificate to only those buildings having duct for broadband in place.