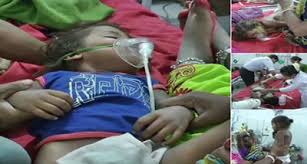 Death toll mounts to 83 due to Encephalitis in Bihar 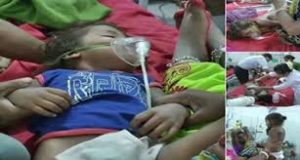 In Bihar, the death toll due to Encephalitis in Muzaffarpur and adjoining districts has reached 83. Three more children lost their lives due to Acute Encephalitis Syndrome.

Condition of 15 is said to be critical in Muzaffarpur. Forty-one people have been admitted to Sri Krishna Medical College and Hospital (SKMCH) and Kejriwal Hospital in Muzaffarpur in the last 24 hours.

With the severe heat wave in the state, new cases of encephalitis and similar symptoms have been reported from Begusarai, East Champaran, Sitamarhi, Vaishali and Jehanabad districts.

Union Health Minister Dr Harsh Vardhan is in Muzaffarpur today. He is taking stock of the situation of encephalitis and other treatment facilities available in SKMCH and Kejriwal hospital in Muzaffarpur.

Talking to reporters on his arrival at Patna, Dr Harsh Vardhan said, all possible help is being provided to state government