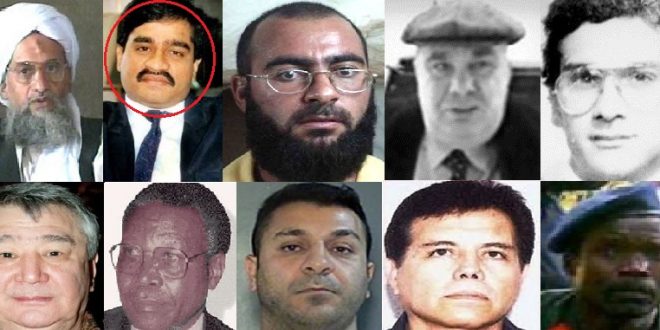 MELBOURNE: The most wanted criminals in the world are the persons you definitely don’t ever want to deal with at any point in your life. They are the most notorious and elusive criminals on earth and have evaded capture for years.

The American FBI along with dozens of other national and international security forces and law enforcing agencies made a list of world top ten most wanted persons such as 1. Ayman al-Zawahiri, Ayman al-Zawahiri is the current leader of al-Qaeda, a multi-national militant organization formerly headed by Osama bin Laden. He was named the leader of al-Qaeda shortly after bin Laden was assassinated in 2011. Before that, he was the operational and strategic commander and was the top lieutenant to bin Laden in the organization, 2. Dawood Ibrahim, Dawood Ibrahim is the most wanted man in India. He is a crime lord and leads the Indian organized crime syndicate D-Company. He founded the organization in the 1970s and has been a wanted man since the 1980s, though he wasn’t branded a global threat until 2003.

Matteo Messina Denaro is a Sicilian Mafia boss, now considered the boss of bosses in the infamous criminal organization after the deaths of Bernardo Provenzano and Salvatore Riina and the 2007 arrest of Salvatore Lo Piccolo. He has proven to be one of the most elusive targets for the Italian police, successfully evading arrest a number of times in the past.

Alimzhan Tokhtakhunov is a Russian businessman suspected of being involved in organized crime. He is believed to be nicknamed “Taiwanchik” because of his noticeable Asian facial features. He has been accused of numerous crimes in the past, which includes smuggling, fixing competition events, committing fraud, and running an illegal gambling ring.

Felicien Kabuga is a Rwandan businessman and millionaire. He is the most wanted man in Africa for his direct involvement in the Rwandan Genocide, one of the most despicable acts in human history. Kabuga got the majority of his fortune through tea farms in Rwanda, which he used to fund the Rwandan Genocide.

Born in Tehran, Iran, Omid Tahvili is the kingpin of an organized crime family in Canada. Yes, you read that right – something like that actually exists in goody two shoes Canada. He reportedly operates out of an Iranian community in Canada and is connected to other international criminal organizations.

Ismael Zambada Garcia is the leader of the Sinaloa Cartel, an international organized crime syndicate which mainly operates from Culiacan, Sinaloa in Mexico, hence the group name. The Sinaloa Cartel is considered one of the most powerful drug trafficking organizations in the world.

Joseph Kony is the leader of the Lord’s Resistance Army (LRA), a guerrilla group which has been active since 1987. He is a self-declared prophet and claims that he is fighting for the Ten Commandments. He also claims to have been possessed by spirits.