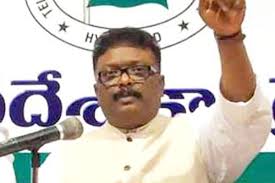 Hyderabad,  TPCC spokesperson Dasoju Sravan Kumar lodged a complaint with the Cyber Crime Police today alleging that some unidentified persons were spreading misinformation against him in the social media alleging that he was leaving the Congress party. He also alleged the miscreants also hacked his social media account.
Dasoju Sravan, along with former MP Anjan Kumar Yadav, lodged a complaint with DCP AK Mohanti at Cyber Crime Police Station Control Room. “Hackers posted a message saying it was posted by me in the name of my twitter account that I am leaving the Congress as BCs were not getting justice in the party. The hackers are also trying to make me a scapegoat with spreading misinformation. There is a conspiracy behind this campaign. The hackers were trying to destabilize the Congress. The TRS alone has such a need of indulging in these activities”, he explained.
Anjan Kumar Yadav alleged that some people were trying to blame Dasoju Sravan in the social media as he was shining in the Congress party.