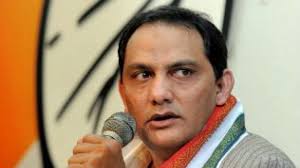 Hyderabad, Jan.2 (PMI): The Congress party on Wednesday dismissed reports that TPCC Working President and former cricketer Mohammed Azharuddin might join ruling TRS party.
“Azhar spoke to me this morning and out rightly denied reports that appeared in a section of media about his likely exit from Congress party to join TRS. Someone has misled the media on this issue,” said TPCC Minorities Department Chairman Shaik Abdullah Sohail while addressing a press conference at Gandhi Bhavan.
Sohail strongly condemned the TRS for spreading rumours while targeting many Congress leaders. He pointed out that a section of media has been publishing stories on likelihood of some Congress MLAs joining TRS. Similarly, they took the name of Azharuddin to float some baseless and speculative stories in the social media which later hit the headlines of mainstream media. “Azhar has clearly stated that he would not quit Congress. He told me that while he was the Captain of Indian Cricket Team, there used to be some tough times when team was losing matches. But the entire team remained united to come out of those situations. Therefore, Azhar has clearly stated that there was no question of leaving the Congress party just because it had lost the elections,” he said.
The Congress leader said it was strange that despite winning two Assembly elections since 2014 and ruling the State for one term, TRS failed to groom leadership of its own. TRS still does not have a face that it could field as its candidate in Secunderabad and Hyderabad Parliamentary constituencies. Consequently, TRS is trying to lure Congress leaders to fill that vacuum, he said.
“TRS is like a company which does not manufacture its own brand. It simply buys other products and pastes its own sticker to claim ownership. Almost 50% of leaders in TRS are originally from Congress. Two out of three Rajya Sabha MPs of TRS originally belonged to Congress. TRS Government’s flagship scheme Rythu Bandhu is being run by a Lok Sabha MP who was originally elected on Congress ticket. Except for KCR family, no other leader could prosper in TRS and whenever party needed good people, KCR resorted to poaching and horse trading,” Abdullah Sohail said.
Sohail said that the TRS had won the last Assembly elections due to EVM manipulation and other irregularities. He said since TRS could not defeat Congress on field through genuine politics, KCR has been using money power and other tactics to make some leaders from Congress to join TRS. “Congress party is like a factory that produces mass leaders. KCR might stay afloat for some time by poaching leaders from other parties. But ultimately it will be the Congress party that will emerge winner,” he said. (PMI)