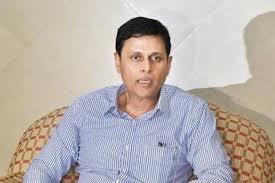 He said that the action of the election commission came following complaint lodged by the party leaders including the contested candidate of Vikarabad assembly constituency Gaddam Prasad Kumar and senior party leader Marri Shashidhar Reddy to the CEO Rajat Kumar. He said that the complaint was lodged following opening of EVMs in the constituency violating the election commission rules.

Addressing media persons at Gandhi Bhavan, he said that in their complaint they raised the issue of irregularities in the functioning of EVMs and added that a case was lodged in the high court on the issue of EVM tampering in the assembly elections held in Vikarabad Assembly constituency. He alleged that the district collector removed the seals of the EVMs without any evidence and base. He demanded the  EC to hold re-election in the constituency by declaring the recent election as invalid. He also demanded the election commission to hold re-elections at Jubilee Hills Assembly constituency as it also witnessed wide spread EVM Tampering cases.(PMI)