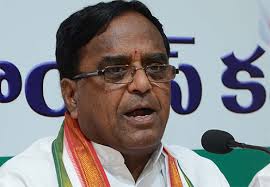 Waranga Urbanl:  Reminding the fact that the then Congress government had  changed the name of Andhra Pradesh Police Academy (APPA) as Raja Bahaddur Venkatrama Reddy Police Academy in the year 2014, the Congress senior leader Ponnala Laxmaiah has said that the Chief Minister K Chandrasekhar Rao’s rule was going on with ‘true lies’.

Speaking to the media here on Wednesday, Ponnala alleged that the KCR government was  wasting public money for the sake of publicity. He asked as to how the Indian Council of Food and Agriculture (ICFA) on Saturday announced the Global Agriculture Leadership Award to Telangana chief minister K Chandrasekhar Rao while  the farmers were committing suicides in the State.