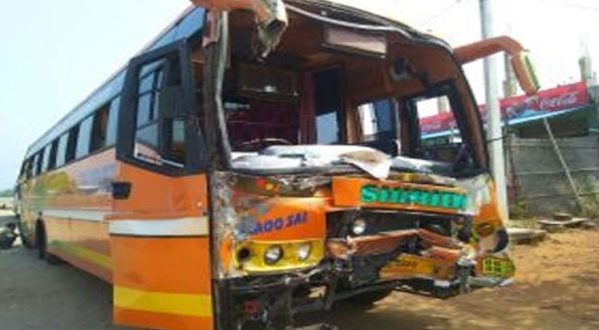 A private engineering college bus rammed into three pedestrians claiming their lives on Saturday evening. Two out of the three were identified as Aravind (24) and Ananthalakshmi (23). They were to get married at the end of this month.

The other victim was identified as Asebu (32). It is reported that the bus driver has lost control of the bus and crashed into the pedestrians and autos.

Arvind was said to have died on the spot while Ananthalakshmi and Asebu succumbed to injuries while undergoing treatment.

In a similar incident, two people were killed while a bus had crashed into their bike.

The victims, identified as Obul Reddy and Bhargavi were traveling on the motorbike.

The incident occurred when a bike rammed into an APSRTC Bus, heading towards Amaravati near the Vallur Mandal. With the motorbike colliding with the RTC bus, the victims sustained grievous injuries resulting in their instant death.