The CM said he was happy that the Kaleswaram project aimed at supplying water to 45 Lakh acres, water for the industrial purposes and drinking water purposes to 80 percent of the Telangana state, has been completed within a short span of time. 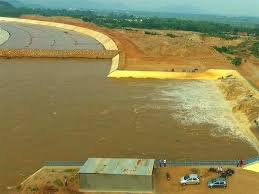 Earlier, the CM from Medigadda helipad reached the Barrage. He went for a long walk on the Barrage. On this occasion, the CM offered flowers, Kum Kum, Turmeric to River Godavari. He also dropped coins into the river. He has inquired from the officials details about floodwaters reaching from Pranahita above Medigadda Barrage.  He also inquired from the officials on how much water flowed down Medigadda reservoir in this season so far. The officials informed the CM that in this season so far 300 TMC of water was flown down. The CM asked the officials to open the gates based on the floodwater being received and maintain water level in the river. After the floods are receded in Godavari, all the gates should be closed, the CM said.

The CM has congratulated the L&T and irrigation officials for completing the Medigadda barrage on time and made it functional this season. Later, the CM visited the Yagashala, which was utilised recently, and received memoranda from the people.