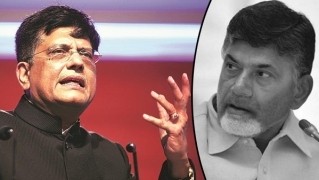 Piyush Goyal, the Union railway minister hit out at Andhra Pradesh chief minister N Chandrababu Naidu on Tuesday. He said people of Andhra Pradesh will give the TDP chief a taste of his own medicine by ditching his party the way he had ditched Atal and Modi governments.

Piyush also came down heavily on the AP CM for spreading half-truths and falsehoods about the BJP. He criticised Chandrababu’s canards about the Centre’s assistance to Andhra Pradesh in the last five years. The union minister also dared the Andhra CM to debate in Delhi on the subject.

He was talking after announcing the BJP election manifesto and said BJP had always worked in close coordination with its allies and never once ditched them. Dubbing the Telugu Desam Party as a private limited company, Piyush accused the party of indulging in corruption and promoting dynastic rule. The central minister added: “The examples are Naidu himself and his son and his brother-in-law and the brother-in-law’s son-in-law are contesting. Four from a family are contesting the polls.”

He also said that Chandrababu was scared of national investigative agencies as he had indulged in largescale corruption. Piyush also said that that the Telugu Desam party neither had leadership nor the trust of people.