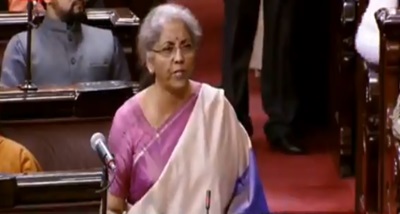 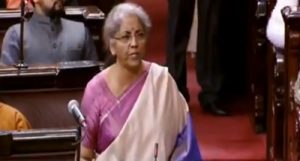 Union Finance Minister Nirmala Sitharaman today reiterated the centre’s commitment towards development of farmers and workers in the country. Replying to the discussion on the Union Budget in the Rajya Sabha, Ms. Sitharaman hailed the Budget as an important step towards Atmanirbhar Bharat. She said through the Budget, the government will be able to reach out to those who are in need of immediate relief due to the pandemic. She said the provisions made for the upcoming fiscal will also help the government to lay down the roadmap for a sustainable growth structure.

The Finance Minister said the budget is a blend of a stimulus package and a long term growth model. She said building an Atma Nirbhar Bharat reflects the aspirations of over 130 crore countrymen. She also stressed on the need to create an ecosystem which involves higher participation providing better opportunities to the youth in the country. Highlighting the major schemes of the government which she said helped people during the times of corona pandemic, the Minister informed that nearly 800 million people in the country were provided free food grains.

Ms. Sitharaman said, under the Pradhan Mantri Ujjwala Yojana more than 80 million women beneficiaries were given free gas cylinders. She informed that the government announced the PM Garib Kalyan package worth Rs 2,76,000 crore in order to reach out to the poorest of the poor in the country even during the tough times of COVID-19.

Taking a sharp jibe at the opposition’s charge of the budget overlooking the needs of the poor, Ms. Sitharaman enumerated a series of schemes by the Centre which she said were all for the benefit of the poor section of the society.

Alleging the opposition of criticising everything the government does, the minister charged them with building false narratives that the budgetary provisions favour only a handful of business cronies. She said construction of houses under the PM-Awas yojana, construction of roads under the PM Gram Sadak Yojana, rural electrification, building of a robust e-market network for agri produce, PM Fasal Bima Yojana benefitting 9 crore farmers and 11 crore farmers benefiting from the PM-Kisan Yojana among others are all part of centres outreach efforts to help the poor and farmer in the country.

The Finance Minister asserted that realising the importance of the need for a sustained development model, the government increased the outlay for capital expenditure by 34.5 per cent. She underscored the need to provide stimulus to capital creation especially after the pandemic. Ms. Sitharaman emphatically asserted that the Budget under the Narendra Modi government has been made more transparent with greater accountability. She informed that every outlay has been brought under the budgetary accounting mechanism.

Citing the budgetary provisions of 2007-08 under the UPA regime, the Minister alleged that the budget documents of yesteryears quoted suspect figures with artificial outlays. Responding to the question posed by various members of the House over Defence Budget, Ms. Sitharaman informed that the capital expenditure in the Defence Budget has been hiked by 18.8 per cent in the next fiscal. She also informed that since Prime Minister Narendra Modi took office in 2014, the centre has been working towards rectifying the mismanagement in the MGNREGA scheme. She said, Rs 1,11,500 crore have been allocated for MGNREGA in the current fiscal to weed out the effects of pandemic and address the requirement of migrant workers in the villages.

Minister highlighted the Emergency Credit line Guarantee Scheme which helped the MSME sector to a large extent. She said the government respects honest tax payers and is committed to utilise their money in the best possible way at the same time being equally accountable. She informed that the centre on-boarded the  food subsidy budget and the provisions of the Food Corporation of India into the Union Budget in order to strengthen the procurement mechanism of food grains in the country. She said, the step will help farmers in the long run as the mechanism will channelize easy and quick payment for their farm sales.