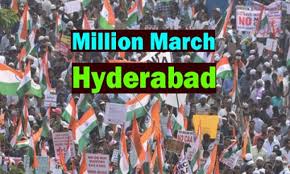 Case To Be Booked Against Organizers Of Million March

Hyderabad, Jan.5 (PMI): Police will book a case against the organisers of the Million March for violating the conditions laid down before they were granted permission for the event at Indira Park here on Saturday.

In response to an application submitted by the organizer,  Mustaq Mallik of Tehreek- e-Shaban, the police gave permission to hold the protest from 2 pm to 5 pm. Mallik had also given an undertaking to this effect