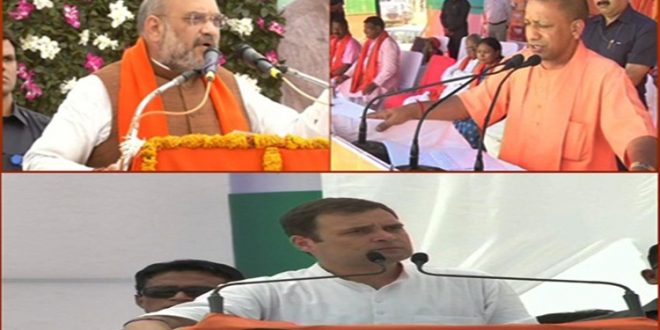 Electioneering has reached its peak for the second phase of Lok Sabha elections. Campaigning for this phase will come to an end tomorrow evening. Ninety-seven constituencies, spread over 12 States and one Union Territory, will go to polls on Thursday.

In this phase, voting will be held in all 39 constituencies of Tamil Nadu, 14 in Karnataka; 10 in Maharashtra; 8 in Uttar Pradesh; five each in Assam, Bihar and Odisha; 3 each in Chhattisgarh and West Bengal; two in Jammu and Kashmir and one each in Manipur, Tripura and Puducherry.

Top leaders of various political parties are leaving no stone unturned to woo the voters. BJP leader and Uttar Pradesh Chief Minister Yogi Adityanath today addressed the public meeting at Rourkela in Odisha. He said the BJP has zero tolerance towards terrorism while both Congress & BJD have adopted a soft approach towards Naxalism and terrorism. He said people across the country want BJP government once again.

In Uttar Pradesh, Congress President Rahul Gandhi as well as party general secretary Priyanka Gandhi addressed a rally at Fatehpur Sikri.  BJP leader Rajnath Singh and Mahesh Sharma and others are also participating in public meetings in different parts of the state including Mathura, Fatehpur Sikri, Badayun and Rampur. BSP Chief Mayawati is also slated to address meetings at Aligarh and Amroha. Samajwadi President Akhilesh Yadav is campaigning in Kasganj and Moradabad.

In Bihar, Katihar, Kishanganj, Purnea, Bhagalpur and Banka parliamentary constituencies are going to polls on Thursday. Our correspondent reports that the second phase is crucial for JD(U) as the party’s candidates are contesting in all five seats.

In Assam, 50 candidates are in the fray for five Lok Sabha seats going to polls in this phase. Chief Minister and senior BJP leader Sarbanand Sonowal and  NEDA Chairman Himanta Biswa Sarma are campaigning for their party candidates.