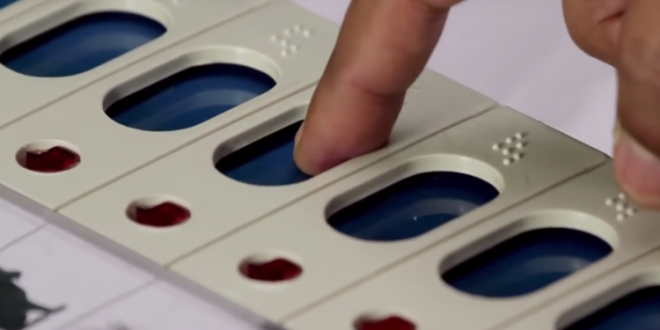 Campaigning is in full swing for the fourth phase of Lok Sabha elections. Seventy one constituencies, spread over nine states, will go to polls in this phase on Monday. Star campaigners of various political parties are making whirlwind tours at different places garnering support for their candidates.

After starting from Lanka Gate 7 km long roadshow will pass through key locations of the city including Ravidas Gate,  Assi Chauraha, Shivalaya, Madanpura, Godolia, Kashi Vishwanath and will culminate at Dashashwamedh Ghat. In evening PM is scheduled to participate in Ganga Aarti at Dashashwamedh Ghat. Narendra Modi is currently a sitting MP from this seat and contesting again. Turncoat Shalini Yadav from Samajwadi party is alliance candidate here who is fighting against Narendra Modi on this seat while congress is yet to announce it’s candidate. Varanasi goes to polls in the seventh and final phase of elections on May 19.BJP President Amit Shah will also be in UP, addressing rallies at Ghazipur and Unnao.

Congress President Rahul Gandhi will hold public meetings at Jalore, Ajmer and Kota in Rajasthan. AIR Jaipur correspondent reports that campaign is at full swing in the state. Congress President Rahul Gandhi will address three election rallies today in Ajmer, Jalore, and Kota. He has already been addressed a public meeting in Banswara District. Many other senior leaders also canvassing for the party candidates including Ashok Gehlot, Sachin Pilot in Mewar and Mewar regions. BJP president Amit Shah will address a rally in Jalore and also participate in a Road Show in Jodhpur. Prakash Javdekar, Vasundhara Raje, Avinash Rai Khanna, Sudhanshu Trivedi are among leaders from BJP who are campaigning for the party. Congress General Secretary Priyanka Gandhi Vadra will be campaigning in Jalaun in UP.

BSP Chief Mayawati is scheduled to address public rallies in Shahjahanpur and Kannauj in the state.

In the fourth phase, voting will take place for 17 Parliamentary seats in Maharashtra; 13 each in Uttar Pradesh and Rajasthan; 8 in West Bengal; 6 each in Odisha and Madhya Pradesh; 5 in Bihar; 3 in Jharkhand. Voting will also be held in all the polling stations falling in Kulgam district under the Anantnag Lok Sabha constituency in Jammu and Kashmir.

In Madhya Pradesh, Chhindwara is one of the important Lok Sabha seats in Madhya Pradesh. There are 14 candidates in this election from Chhindwada. Most of them are independents. The Congress fielded Madhya Pradesh Chief Minister Kamal Nath’s son Nakul Nath against the BJP’s tribal leader Nathan Shah. and BSP’s Gyaneshwar Gajbhiye while the chief minister will also contest the assembly by poll from Chhindwara assembly constituency. A traditional Congress bastion, Chhindwara elected a non-Congress candidate only once – in the 1997 by poll when it elected BJP’s Sundar Lal Patwa. The party’s sitting MP, Kamal Nath, has won from the Chhindwara constituency 9 times since the 1980 Lok Sabha elections. The Congress will be hoping to retain the Chhindwara Lok Sabha constituency once again while the BJP will trying to break the Congress tradition of winning the seat.

In Maharashtra, in order to attract and encourage Mumbaikars to come and vote in large numbers, the state election commission has made elaborate plans. AIR correspondent reports that, with an aim to encourage more and more Mumbaikars to participate in the festival of democracy, when the city goes for polling on Monday, the state election commission has informed that each assembly constituency in suburban Mumbai will have a ‘Sakhi matdan kendra’. These polling booths will be managed entirely by women. Rangoli and other art forms would be used to make these booths more attractive while cold drinks would be offered to all the voters at these booths. As a “goodwill gesture”, the commission has decided to give a pack of sanitary napkins to all the women voters at these booths. Mumbai District Collector in association with state election commission had also organised a flash mob at Mumbai’s Chhatrapati Shivaji Terminus yesterday to urge commuters to vote and fulfill their social responsibility. More flash mobs are planned at Churchgate, Mumbai Central and Gateway of India in the coming days. Mumbai will vote in the fourth phase of Lok Sabha polls on Monday.

Besides the 71 Lok Sabha seats, forty two of the total 147 Assembly seats in Odisha will also go to polls in this phase. Meanwhile, re-polling is being held today in nine booths located in eight Assembly constituencies in Odisha. The constituencies are: Sorada, Bonai, Sundargarh, Daspalla, Attabira, Bargarh, Padampur and Brajarajnagar. Voting was affected in these booths due to various reasons, including procedural errors and damaging of an EVM by a candidate.

Re-polling is also taking place at one polling station in 37-Tyui Assembly Constituency in Wokha district of Nagaland. Re-polling is also being held at a polling booth in Agra Lok Sabha seat in Uttar Pradesh. It was ordered by the Election Commission after the presiding officer wrongly d some votes after the polling by pressing a button of the control panel of the EVM.