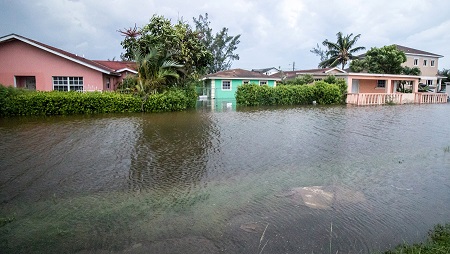 LOS ANGELES: The United States Coast Guard said on Monday night it had located the bodies of 35 people, after a dive boat anchored off the coast of Southern California caught fire and sank.

Lt. Cmdr. Matthew Kroll of the US Coast Guard said the authorities had recovered 20 bodies and identified the location of five more.

Those five cannot be recovered due to unsafe conditions under the ship, which had been on a three-day scuba diving excursion to the Channel Islands, northwest of Los Angeles.

Kroll said the bodies that had been recovered had injuries consistent with drowning.

Five crew members managed to escape when the fire broke out and were rescued by people on a boat nearby.

The Los Angeles sector of the US Coast Guard said earlier that more than 30 people were “in distress” on board the boat. 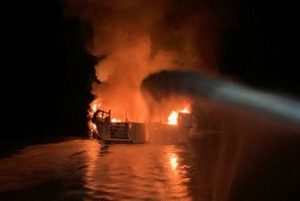 “A group of crew members has been rescued [ones with minor injuries] and efforts continue to evacuate the remaining passengers,” the Coast Guard tweeted early on Monday.
“The vessel was reported as being on fire,” it said.

According to the Associated Press, the boat was on a Labor Day cruise, taking divers to the Channel Islands.

The vessel, Conception, was operated by Santa Barbara-based Worldwide Diving Adventures, which said on its website it has been operating such expeditions since 1972.

This weekend trip had departed early on Saturday morning with plans to return on Monday evening. 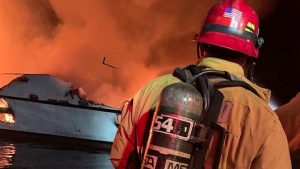 The boat was outfitted with dozens of small berths for people to sleep in overnight.

It was not immediately clear when divers would be able to search the boat for the missing.

“It’s upside down in relatively shallow water with receding tides that are moving it around,” Santa Barbara County Sheriff Bill Brown said.

Meanwhile, Hurricane Dorian, one of the most powerful storms ever to hit the Atlantic, continued to pummel the Bahamas, leaving a deadly path of destruction despite weakening slightly.

Dorian was downgraded to Category 3 hurricane early on Tuesday, but continues to batter the Bahamas as it remains almost at a standstill.

Bahamas Prime Minister Hubert Minnis said at least five people had died as a result of the storm, but officials said the death toll could go up. 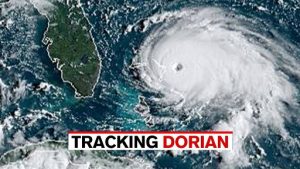 “We are in the midst of a historic tragedy,” Prime Minister Hubert Minnis said in announcing the fatalities. He called the devastation “unprecedented and extensive.”

Officials said they had received a “tremendous” number of calls from people in flooded homes.

A radio station received more than 2,000 distress messages, including reports of a five-month-old baby stranded on a roof and a grandmother with six grandchildren who cut a hole in the roof to escape rising floodwaters. Other reports involved a group of eight children and five adults stranded on a highway and two storm shelters that flooded.

Police Chief Samuel Butler urged people to remain calm and share their GPS coordinates, but he said rescue crews had to wait until weather conditions improved. 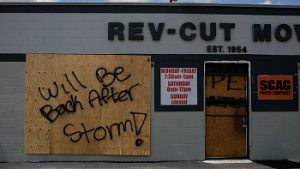 “We simply cannot get to you,” he told Bahamas radio station ZNS, as forecasters warned that Dorian could generate a storm surge as high as 23 feet (7 meters).

Residents were warned not to leave shelters until the eye of the hurricane passed. The storm’s strongest winds are usually close to the eye.

As many as 13,000 homes in the Bahamas may have been destroyed or severely damaged, the International Federation of Red Cross and Red Crescent Societies said. (Int’l Monitoring Desk)