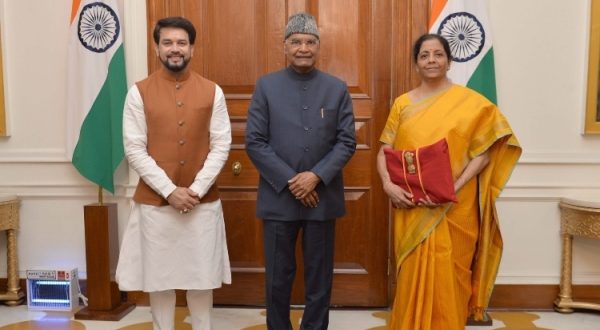 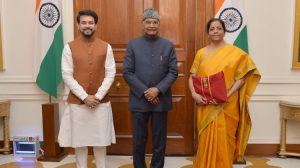 NEW DELHI: The Union Cabinet headed by Prime Minister Narendra Modi on Saturday approved the Budget for the financial year beginning April 1, which may see measures to lift the economy from the worst economic slowdown in 11 years. Before coming to Parliament for presenting her second budget, Finance Minister Nirmala Sitharaman and her team met President Ram Nath Kovind.

She was accompanied by Minister of State for Finance Anurag Thakur and top officials of her ministry including Finance Secretary Rajiv Kumar.

“As per tradition, Finance Minister Nirmala Sitharaman calls on President Kovind at Rashtrapati Bhavan before presenting the Union Budget,” tweeted the President of India’s handle along with two photographs from the meeting.

Like last year, Sitharaman opted for a traditional red-coloured ‘bahi-khata’ to carry budget documents. Dressed in a crisp yellow silk saree, she posed for cameramen at the Parliament House gate with the budget documents wrapped in a red silk cloth, adorned with a golden Indian emblem.

Facing the worst economic slowdown in more than a decade, Sitharaman is expected to pull out all stops to spur consumer demand and investment, government sources and economists said.

The real gross domestic product (GDP) growth is estimated to fall to an 11-year low of 5 percent in FY20 from 6.1 percent in FY19. Estimated nominal growth at 7.5 percent in FY20 is the lowest since 1975-76 (FY76) as per the FY12-based GDP series. Index of Industrial Production (IIP) growth turned positive but remained low at 1.8 percent in November 2019 after contracting by (-) 4 percent in October 2019. Consumer Price Index (CPI) inflation increased to a 65-month high of 7.4 percent in December 2019, its fifth sequential rise, mainly due to persistently rising vegetable prices. Also, growth in bank credit fell to a 25-month low of 8 per cent in November 2019.