Addressing the media on this occasion, Haryana Chief Minister Manohar Lal termed the manifesto SANKALP Sutra and source of inspiration. He expressed happiness that the manifesto aimed at Ram Rajya, has been released on Maharishi Valmiki Jayanti. While describing the spirit of Manifesto, Chief Minister said, Congress in its manifesto has promised to remove the condition of educational qualification contesting for Panchayati Raj institutions, which shows their thinking.
Speaking after releasing the manifesto, Working President of BJP Jagat Prakash Nadda said that the Election Manifesto is a realistic document which is based on the feedback of the public. He said, in last five years Haryana Government has changed the political culture of the state and ended culture of corruption and nepotism. 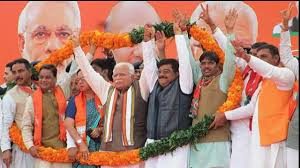 Mr. Nadda Said, in Congress regime, the Army was kept short of arms and equipments while under the leadership of Prime Minster Narender Modi, the equipment and weapons like Rafale, Bullet Proof Jackets, Tejas,  etc. are being procured for forces. He said, it has meaning for Haryana because every family of the state has its member in the forces.
Giving main points of the manifesto, he said, the BJP Government will constitute a new ministry under the name of Youth Development and Self-Employment during next five years rule. The manifesto promises launch of Haryan Start-Up Mission and four entrepreneurship centers to boost the start-up eco-system and affecting the implementation of MUDRA Loan Scheme.
The manifesto also promises without guaranty loan for higher and professional education, employment in every house of Haryana and provision of giving special benefits to the industry which will provide 95% employment to the Haryanvi people. In the manifesto, opening of sports stadium in every village, setting up of one thousand sports nurseries, micro-irrigation projects, tube well shifting policy, launch of peri-urban agriculture, doubling the capacity of sugar mills has also been promised. 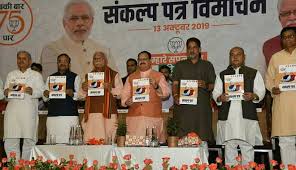 The manifesto also promises to bring a law with provision not to mortgage land more than 1.25 cost of the farm debt. In the manifesto, there is a proposal of common test for all jobs and slew of promises for women including free education to two daughters from a family from K.G. to P.G. with annual income less than One lakh 80 Thousand and land less than five acres.
The manifesto also promises to include Kinno, Guava, Carrot and Peas crops in the Bhavantar Bharpai Yojana and interest free crop loan up to 3 lakh rupees. BJP has also promised to fulfill the target of waiving interest and penalty of around 5000 crores rupees on crop loans taken from cooperative banks to benefit the farmers.