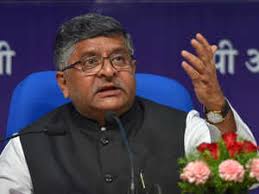 Briefing media in New Delhi, Senior leader and Union Minister Ravi Shankar Prasad criticized Congress President Rahul Gandhi over his views expressed on the matter. Mr Prasad said, the tweet of Mr Gandhi must be a headline in Pakistan.

Mr Prasad said, the technical hold on proscribing Azhar as global terrorist by China was put that time even when UPA was in power. He said, there must be consensus on the issue of foreign policy and every one should speak in one voice in this regard.

Mr Prasad said, except China, the whole world is standing with India on the announcement of Azhar as a global terrorist. He said, this is India’s diplomatic victory in a wa