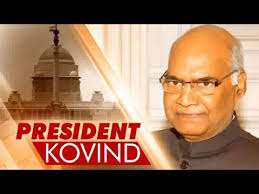 Hyderabad, Aug.14 (PMI): President Ramnath Kovind had issued a notice to the Telangana State Government to explain the reasons behind multiple suicides committed by 27 Intermediate students. He also ordered the State government to send him a detailed report on the situation leading to the unprecedented reaction from the youngsters in the State.

The Chief Secretary received the notice from the under-secretary of

Union government on behalf of the President. It demanded an explanation on the faulty result process in Intermediate results notification. A few days ago, State BJP president Laxman along with a delegation of party leaders called on the President in Delhi and submitted a petition in reference to the unprecedented suicides of 27 Intermediate students in Telangana State in reaction to faulty Intermediate results.

In a press note here today, State BJP Chief Spokesperson K. Krishna Saagar Rao, demanded that the Telangana government send a quick and accurate report to the President. “TRS government owes an explanation to the people of the State for the painful suicides of youth in the State due to the government’s negligence and corrupt practices”, he added.

2019-08-14
admin
Previous BJP can’t emerge as alternative to TRS: Talasani
Next SHIA MUSLIMS PROUD TO BE SHIA AND PROUD TO BE AN INDIAN