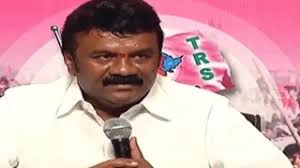 Hyderabad, Aug.14 (PMI): Animal Husbandry Minister Talasani Srinivas Yadav today said the Congress was only alternative to the ruling TRS and not the BJP. He rejected the rumors as baseless that Hyderabad will be made a Union Territory in future in the wake of bifurcation of Kashmir into the two Union territories.

Talking to media persons here, Srinivas Yadav said there was no possibility of Hyderabad becoming a Union Territory under any circumstances. There was no need to give focus on such comments, which are not true, the minister maintained. He also said the BJP cannot be strengthened by welcoming senior leaders from other parties and become an alternative to the ruling party in the State of Telangana.

He openly criticized the BJP for making tall claims that it will wrest power in the State in 2023 by strengthening the party. The BJP will not get more seats in the upcoming polls to municipalities and municipal corporations in the State, he said. Despite being in power at the Centre, the BJP cannot influence the electorate to win the civic bodies in the polls, he said. As the saffron party has no cadre and functionaries in the State, it cannot become an alternative to the TRS, the minister opined.

He also said the BJP was inviting senior leaders from other parties to join it will be a futile exercise. Just by admitting leaders of no public support will not help the BJP, he said. The BJP has no vote bank like the Congress has in Telangana, he felt. The Congress, on the other hand, has cadre and leadership in the State and may become an alternative to the TRS, he felt.

Talasani said the TRS has supported the BJP government at the Centre to abrogate Article 370 leading to division of Kashmir into two UTs. He stoutly denied that he urged the TRS leadership to promote his son Sai Kiran, who lost MP polls, as Mayor for Hyderabad. He asked the BJP government as to why it was not according national status to Kaleshwaram project or Palamur Ranga Reddy in Telangana if it wants to develop the State.