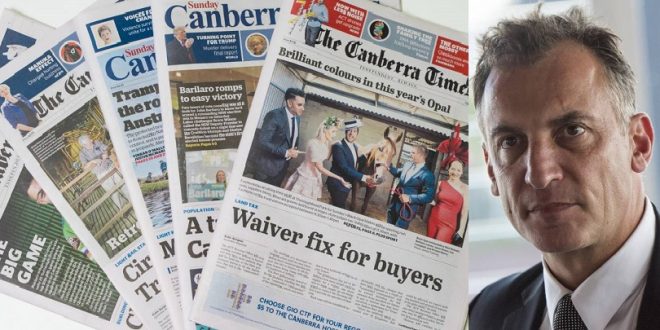 CANBERRA: Antony Catalano says he plans to “grow the business, not shrink it to greatness” after buying the regional publishing group which includes The Canberra Times.

Catalano said after the deal was announced on Tuesday that he and Thorney would each take a 50 per cent stake in ACM, whose name could change after the sale was finalised in June.

He said he would likely take on the role of executive chairman of the company, which was part of the Fairfax Empire that merged with Nine late last year.

Catalano identified seven of ACM’s larger papers, including the Times, as key players in the firm and said the populations they served made them valuable assets.

“I’ve always been fascinated by the size of the audience of those publications,” he said. “There’s obviously the Newcastle Herald, both the Canberra Times and the Illawarra Mercury, The Border Mail, and then some others in the group, the Examiner Launceston, the Ballarat Courier, Bendigo Advertiser. They’ve all got very large populations in those areas. It’s an opportunity to generate significant revenue. Media sells on the audience. It sells papers and it sells advertising based on the audience size and the quality of those publications.

“I think we can beef that up and invest. I’m going to continue to do that pretty aggressively.

“From my perspective, there’s certainly what I would call regional-city assets in there, and the rest of them are obviously very good hyper-local content players.”

When asked again about the future of the dozens of smaller ACM publications across Australia, Catalano said on Tuesday: “The question now is to look at all of the options open to us to make this a bigger and better business, and not a shrinking business.”

“And that’s in the context of a category that is facing structural headwinds. It has for many years,” he said.

Catalano said larger ACM newspapers would continue to publish Domain magazines, published as All-Homes in Canberra, locking in a key revenue stream for those businesses.

Nine owns 59 per cent of Domain, which was part of the Fairfax group before the merger.

Catalano, who worked for 26 years at Fairfax over two stints, said he had expressed an interest in buying ACM “immediately after” the Nine merger.

“I haven’t invested in this business with a view to going in there and stripping it bare and closing it down. That’s not the intent,” he said. “The intent is to buy a business that I think has some value in it. What protects it against downside is the variety of income streams. There’s currently printing, advertising revenue and circulation subscription revenue.

“Finding new ways of generating revenue are all the things we will look to explore.

“My experience in the past is to protect jobs. I’ve got a history of hiring, not firing. I want to grow the business, not shrink it to greatness. Not my style.”

Asked about editorial independence, a key issue for journalists and their union when Fairfax merged with Nine, Catalano said: “There’s simply no merit in content that doesn’t resonate with the audience, and it doesn’t resonate if it doesn’t have authenticity and credibility.”

The Media, Entertainment and Arts Alliance welcomed Catalano’s comments about investing in the larger papers but was concerned this could come at the expense of smaller mastheads being closed.

“There are about 650 editorial staff employed across the country by the ACM group. It is essential that the individual audiences for each of the group’s mastheads be respected,” MEAA media director Katelin McInerney said.

Catalano was property editor and marketing director at The Age but was made redundant in 2008.

He then founded The Weekly Review, a free property magazine which started winning business from The Age.

He tried to scuttle the Fairfax merger late last year before emerging as the favourite to take over Nine’s regional newspapers.