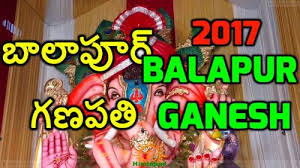 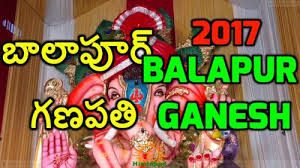 Hyderabad : The much popular Balapur Ganesh Laddu broke its own record by fetching Rs 15.60 lakh in the open auction held before the start of Ganesh immersion procession here on Tuesday.This year, the laddu got Rs 95,000 more than last year which was bought by a local leader Skylab Reddy for Rs14.65 lakh.

Excent and surprises marked the Balapur laddu auction this morning. One Nagam Tirupathi Reddy, a realtor of Ayyappa Society in Madhapur in hitech city wrested the 21 kg Laddu for Rs 15.60 lakh among 15 competitors in the nail biting open auction. The devotees of Lord Ganapathi strongly believe that the sacred Laddu fetches health and wealth to the buyer.

An excited Nagam Tirupathi Reddy, a native of Wanaparthy and a relative of former minister and BJP leader Nagam Janardhan Reddy said it was a dream come true for him as he yearned for the holy Laddu for several years. “Finally, I got the Laddu prasadam wityh the blessings of Lord Ganesha” he said. Local leaders and businessmen competed with each other to own the Laddu as they believed it would bring them good luck. The funds yielded from the Laddu will be spent on the development of the village, temples and and welfare activities.

It may be mentioned here that last year Balapur Ganesh laddu was won by a Medchal businessman Skylab Reddy for Rs 14.65. Today’s bidding started around 9.30 am. After special pujas, Balapur Ganesh was taken in a mammoth procession of devotees.  The tradition of auctioning the Laddu started in 1994 with formation of Balapur Ganesh Utsav Committee.

After the auction, the Utsav committee members felicitated Nagam Tirupati Reddy and presented him a two kilogram silver plate along with the laddu to him. Police had made elaborate bandobust on the occasion.