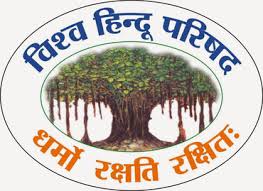 Hyderabad, Oct.23 (PMI): The Vishwa Hindu Parishad’s Bajrang Dal leaders have lodged a complaint with the Banjara Hills police about the inflammatory and derogatory program telecast on TV9 channel titled as “Deepavali Roju Crackers Kalchevaallu Gaadidhalu” (those  bursting crackers on Deepavali Day are donkeys)  injuring the feelings of the majority community in the country.

In the complaint, the VHP-Bhajrang Dal leaders M Kiran Kumar and S Mallesh Yadav said the intention of the   program was to humiliate the Hindu society on the name of burning crackers by calling all those burning crackers on Diwali as donkeys. “This a direct attack on the Hindus, our sentiments and our festivals. It was loathsome to see such programs. There were a number of incidents earlier in which TV9 channel deliberately injured sentiments of Hindus through its programs and debates.  Also, a number of complaints have been registered in the Banjara Hills Police Station and criminal cases were pending trial in the court of law”.

The VHP leaders have also demanded that the government take stringent action against the channel for its derogatory remarks on Hindu society and also to take action in such way that the news channel doesn’t make such notorious programs again.