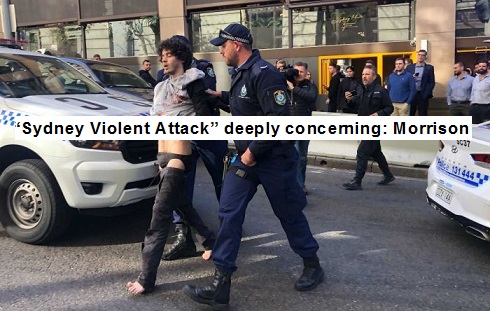 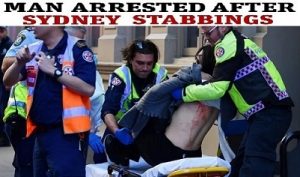 SYDNEY: Once again, the Australian police have declared another “White Terrorist” in “Muslim Incognito Style” (who arrested during a ‘Dramatic Action’ on Sydney’s busiest street in after noon timings) as ‘psycho’ traditionally, habitually, expectedly, routinely and historically but this time it was stated hand to hand along with relevant medical history and appropriate proves, while neither any phrase like ‘white terrorist’ or ‘white terrorism’ (which usually reserved for Muslims) was used nor another fear or individual’s or group’s expected action against nation and country came in-front by local and international media or country’s Law Enforcing Agencies (LEAs), local or int’l organizations, on the other if the arrested suspect established as Muslim even though fake or just used in-term routinely and terminologically, the entire scenario and reports would have definitely changed as practice, but the ‘chapter has closed and the game is over’;  sources, natural and impartial scholars, general people, eyewitnesses, victims of previous incidents, aggrieved men and women of former terror episodes, lawyers, politicians, foreigners, local persons, representatives of NGOs and residents of the area where the drama was planned said, claimed and affirmed. 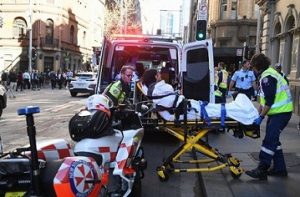 The Guardian (Australia), Australian Broadcasting Corporation (ABC) News and many other country’s media clusters even the BBC report (approximately and conclusively same) and as per the details a man who allegedly stabbed a woman to death in Sydney’s central business district before attacking others on a busy city street with a butcher’s knife was arrested carrying information about terrorist attacks and extremist ideologies on a USB drive.

But police say the man did not have any known links to terror groups, and that he acted alone. The attacks are not being treated as a terrorist attack, the New South Walses police commissioner, Mick Fuller, said on Tuesday night.

The 21-year-old man from Marayong, near Blacktown in western Sydney, jumped on cars and yelled at bystanders to “shoot me in the fucking head” before being restrained by members of the public – later lauded as “heroes” by police – who used cafe chairs and a milk crate to pin him down. 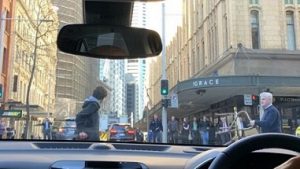 About an hour after the man’s arrest, the body of a 21-year-old woman was found inside an apartment in Clarence Street, in central Sydney. It is understood she had suffered multiple stab wounds.

Police say the man was arrested carrying a USB drive containing documents espousing “terrorist ideologies” and detailing mass casualty crimes, including recent attacks in North America and New Zealand, but he did not have any known links to terror groups, and acted alone.

The man has a history of mental health problems. It has been reported that he had escaped from a mental health facility in recent days, but this has not been confirmed.

“His history is unremarkable compared the gravity of his crimes,” Fuller said. He said the man was known to police in relation to his history of mental health conditions, not because of any links to terror groups. 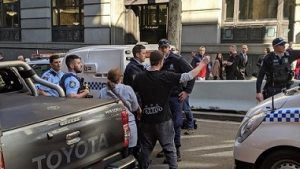 The man’s offending first came to public light when he was seen running amok through Clarence Street. Fuller described it as six minutes of “terrifying carnage”.

A 41-year-old woman was stabbed in the back in the Hotel CBD, on the corner of Clarence and York streets.

She was taken to St Vincent’s hospital suffering a non-life threatening injury from a single stab wound to her back. There were no other injuries after the man appeared to attack passersby at random with a butcher’s knife.

The alleged offender, also suffering injuries, was taken to hospital, but was expected to be transferred to a police station overnight and charged, likely with murder and serious assault charges.

“If it becomes a terrorist incident… obviously there will be other charges in relation to that… it’s an evolving investigation,” Fuller said. 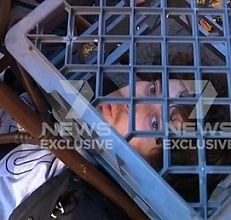 Footage of the man’s rampage showed him running across a city intersection, his clothes apparently stained with blood. At one point he climbs on the roof of a car, yelling, as a man carrying a cafe chair seeks to corral him.

“To approach a person with a mindset of obviously what this person [had], with clear evidence of a stabbing previously, these people are heroes.” 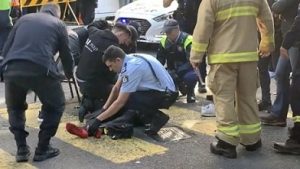 He said their actions had prevented others from being hurt.

“These members of the public, going about their day-to-day business, have jumped into a situation which was extremely dangerous and hostile and they have brought a person, who we will be alleging has stabbed an innocent person for no specific reason, into custody and allowed us to do our job.”

Wood said it had been reported to him that the man had yelled “Allahu Akbar”; he said this had not been captured as part of the “evidentiary base” but would form part of the investigation.

Footage posted online of the man yelling reveals an indistinct pronunciation, suggesting he was not an Arabic speaker, nor familiar with the phrase.

The driver of the car on which the man climbed said he had appeared suddenly on the street, covered in blood and brandishing a butcher’s knife. 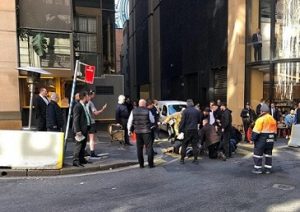 “He was fearless, he was completely fearless. He was on something, I don’t know what he was on. It was a scary moment, I’m sure, for a lot of people in Sydney,” the driver told Channel Nine.

Paul Walker, a Channel Seven cameraman was on the scene and followed the chase through the city filming the arrest near the corner of Carrington and Wynyard streets in Wynyard.

As the man lay restrained on the ground, Walker filmed a bottle of pills next to him, labelled Antenex.

The drug is a diazepam which is used to treat anxiety and depression. Seven was reporting that the man had absconded from a mental health facility some days before.

Walker said the man with the chair, whom he identified as a bank worker, had used the chair “like a lion tamer”, trying to turn the man around as he ran through the city streets. 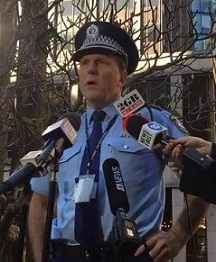 “They moved through the city streets, the fireys were calling out to people to run away,” Walker said.

“One guy wanted to kill him, but the fireys tried to settle him down. Once he was in a position that was compliant everyone was just trying to work out why.”

Being a proficient senior journalist (this correspondent) and because of most credible and professional media outlet (PMI) neither we are rejecting, complaining, refusing, criticizing or commenting in this regard nor considering, publishing, flashing, describing, and providing the such details in this continuation.