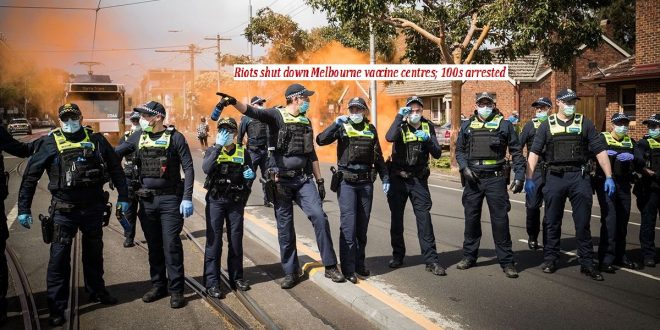 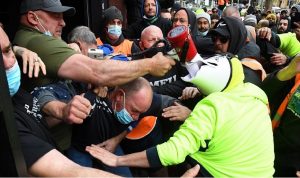 MELBOURNE: Australian rulers have once again proved that they are only the world’s worst regime but also deal nastiest with citizens and try to be smart unnecessary like they have been indulging in irrelevant matters and non-concerned issues since a long, sources and victims told PMI.

Police have arrested 102 protesters for gathering in Melbourne’s CBD, as large anti-vaccine and anti-lockdown rallies failed to materialize on Thursday.

However, a community clinic and a city vaccination centre were forced to close, with co-health saying in recent days its workers had been spat on, had liquid hurled on them and been heckled by the mob.

On Thursday evening, Victoria Police said the arrests were for breaches of state lockdown rules, as well as other outstanding warrants.

The ABC understands one protester who attended Wednesday’s gathering at the Shrine of Remembrance is now in hospital with COVID-19.

There was a large police presence in the city on Thursday; however, the streets remained quiet and largely calm, with few protesters congregating in groups.

Some protesters, using encrypted messaging apps, had discussed staging rallies at city vaccination hubs but were unable to amass numbers like earlier in the week.

While have some vowed to rally “every day” until lockdowns are lifted, Victoria Police again warned them to stay home and comply with Chief Health Officer’s regulations. 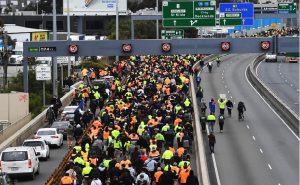 “Victoria Police will continue to provide a highly visible presence across the city over the coming days,” a spokeswoman said.

Authorities are investigating a video on social media depicting a violent arrest at Flinders Street Station.

A Victoria Police officer is seen in the video approaching a man from behind and violently tackling him to the ground before arresting him.

“We’ll investigate that. I don’t know what the full circumstances are. There’s always context to everything,” Commissioner Patton said.

Anyone who witnessed the incident, including the person who took the footage and the person depicted in the vision, are urged to contact Crime Stoppers on 1800 333 000.

Co-health chief executive Nicole Bartholomeusz said clinic several staff had been physically and verbally abused in the city while on their way to work, and “targeted because they were wearing their co-health identification”. 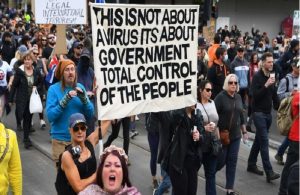 “Enough’s enough. This is just disgraceful behavior at a time when healthcare workers are doing so much to protect the community and save lives,” she said.

“It’s really sad in this day and age that staff have to remove a lanyard, remove a name badge or not wear their co-health uniform to protect themselves.”

Ms Bartholomeusz said that while staff was physically “OK”, they were also shaken and distressed by the abuse.

The Melbourne Town Hall vaccination centre and a drop-in health clinic for people experiencing homelessness opposite Queen Victoria Market have shut for at least four days, in order to protect staff and patients.

“This means people experiencing homelessness can no longer access vital services and supports at Central City and at least 200 people per day will no longer be able to access the vaccine from the Melbourne Town Hall,” Ms Bartholomeusz said.

“Let us get on with the work that we need to do. There are so many people seeking a vaccination, let us do that work to the best that we can.”

“Those staff has been treated appallingly,” he said. 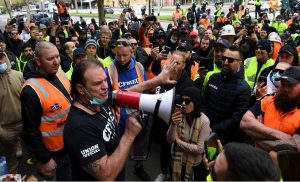 “These people are doing the very best of work. They’re vaccinating people, for heaven’s sake … why would you abuse, why would you, as I’m told, be spitting on people who are doing that sort of work?”

About 100 police had gathered at the offices of the Construction, Forestry, Maritime, Mining and Energy Union (CFMEU) on Thursday morning, with one person seen arrested.

A similar police presence was seen at the Shrine of Remembrance and at the Parliament of Victoria.

Police arrested 215 people at the Shrine of Remembrance on Wednesday, following a stand-off lasted several hours, which ended when officers moved in on the crowd.

Two police officers were struck in the head with bottles, while another was admitted to hospital with chest pains.

Speaking from Washington DC, the Prime Minister said the Shrine was a sacred site and not a place of protest.

“The conduct was disgraceful,” he said.

“It was disrespectful and it dishonored those Australians who have made the ultimate sacrifice and I would hope any and all who were in that should be ashamed.” 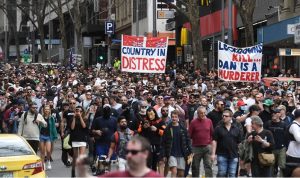 Protests against the coronavirus lockdown and mandatory vaccinations began on Monday after the Victorian government announced a two-week shutdown of the construction industry, and have grown in scope since then.

“We know what the Shrine means to the veteran community of Victoria and Australia and to see it disrespected in that way was very difficult for all of us,” Mr Lee said.

“Those that seek to divide us in a time of crisis are not doing themselves any favours and not representing the best values of what it is to be Australian.”

The secretary of the national construction arm of the CFMEU, Dave Noonan, condemned the “mob” that used the Shrine to protest and said they should be “ashamed”.

Noonan said the Shrine “commemorates those who served their country in armed conflict and at war” and that yesterday’s protests did not represent “the vast majority of union members in the construction industry nor the Australian community”.

“Some of them [protesters] may well be union members but others have come in and hijacked the opportunity,” he said. 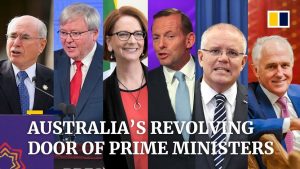 “They’ve got a long-term plan and know that they’re not going to achieve what they want straight away.”

Professor Barton said media attention and provoking police into using “heavy-handed measures” would help their cause.

He said those pushing a far-right agenda were a small group but said the Christchurch, New Zealand mosque attacks that killed 51 people died proved one lone actor could “cause immense damage”.

“Longer term, the larger risk is just the corrosion of our social cohesion, turning ourselves against each other and fuelling hate.”

Media outlets have won the right to keep flying helicopters over Melbourne, after the Federal Court granted an interim stay on restrictions imposed yesterday by the Civil Aviation Safety Authority (CASA).

Under the rules, news helicopters were required to seek approval from Victoria Police before flying and organizations had to delay broadcasting any footage of this week’s Melbourne protests for an hour but the interim stay means CASA’s flight restrictions will no longer be in effect until a full trial takes place, which may be as early as next week.

In handing down judgment, Justice Helen Rofe said there was “a serious question to be tried” over the orders, which came at the request of Victoria Police.

Post Views: 237
2021-09-24
admin
Previous Australia reveals where it stands in world
Next Economic sanctions on Afghanistan must end: China