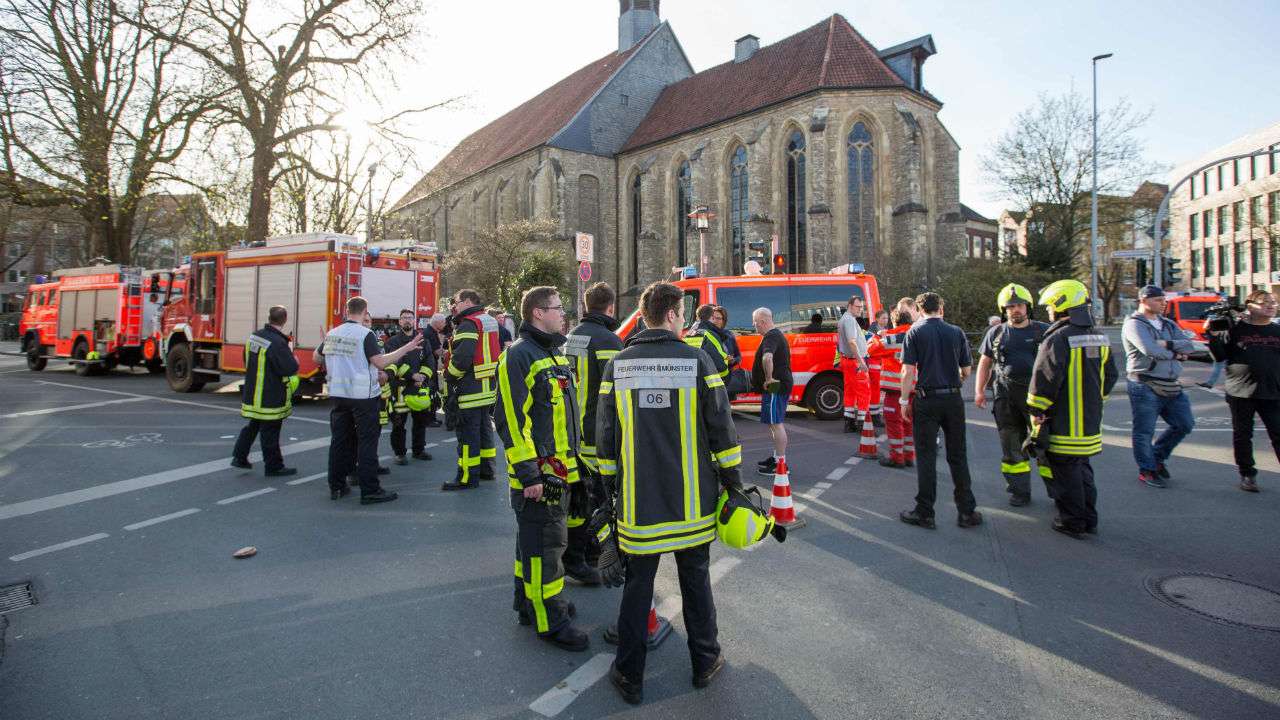 At least 3 dead after vehicle ploughs into crowd in Germany, driver kills self 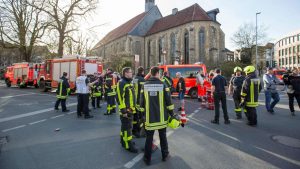 At least 3 dead after vehicle ploughs into crowd in Germany, driver kills self

At least three people died on Saturday when a vehicle ploughed into busy cafe and restaurant terraces in the German city of Muenster before the driver shot himself dead.

Images on social media showed smashed and upturned tables and chairs strewn accross the pavement outside an eaterie in the centre of the picturesque medieval city.

At least 20 people were injured, six of them seriously, according to police, while media reports said the driver had been behind the wheel of a delivery van.

A police spokeswoman in the western city, Vanessa Arlt, told AFP that the driver of the vehicle “shot himself”.

“The perpetrator drove into several cafe and restaurant terraces in a major square in the centre of Muenster,” Arlt added.

Police spokesman, Andreas Bode, said it was “too soon” to call the incident a deliberate attack.

According to the online edition of the Spiegel magazine, German authorities were “assuming” the incident was an attack, though there was no immediate official confirmation of a motive.

“Our thoughts are with the victims and their loved ones.” Images broadcast by German television showed police and firefighting vehicles clustered around a street in the centre of the city of 300,000 people.

Armed police were deployed and officers urged residents to avoid the city centre to allow investigators to get to work.

Germany had long warned of the threat of more violence ahead after several attacks claimed by the Islamic State jihadist group, the bloodiest of which was a truck rampage through a Berlin Christmas market in December 2016 that left 12 people dead.

The attacker, Tunisian asylum seeker Anis Amri, hijacked a truck and murdered its Polish driver before killing another 11 people and wounding dozens more by ploughing the heavy vehicle through the festive market in central Berlin.

He was shot dead by Italian police in Milan four days later while on the run.

Germany has since been targeted again in attacks with radical Islamist motives.

In July 2017, a 26-year-old Palestinian asylum seeker wielding a knife stormed into a supermarket in the northern port city of Hamburg, killing one person and wounding six others before being detained by passers-by.

And at the end of October, German police arrested a 19-year-old Syrian identified only as Yamen A. suspected of planning a “serious bomb attack” using powerful explosives.

IS also claimed responsibility for a number of attacks in 2016, including the murder of a teenager in Hamburg, a suicide bombing in the southern city of Ansbach that wounded 15, and an axe attack on a train in Bavaria that left five injured.

Germany remains a target for jihadist groups, in particular because of its involvement in the coalition fighting IS in Iraq and Syria, and its deployment in Afghanistan since 2001.

German troops in the anti-IS coalition do not participate in combat operations but support it through reconnaissance, refuelling and training.

Germanys security services estimate there are around 10,000 Islamic radicals in Germany, some 1,600 of whom are suspected of being capable of using violence.

Chancellor Angela Merkel has allowed in more than one million asylum seekers in the past two years — a decision that has driven the rise of the far-right Alternative for Germany (AfD) party, which charges that the influx spells a heightened security risk.

IS also claimed several similar attacks in Europe, including a rampage along Barcelona’s Las Ramblas boulevard in August 2017 that killed 14 and left more than 100 injured.

The deadliest such incident in recent years was in the French resort city of Nice in 2016, where a man rammed a truck into a crowd on France’s national July 14 holiday, killing 86 people

2018-04-07
admin
Previous Sri Reddy Strips At Hyderabad Film Chambers
Next . CS orders quick survey of Endowment, Wakf, Town lands Hyderabad, April.9 (PMI): Chief Secretary SK Joshi today directed the official concerned to complete land cleansing survey of the lands of Endowment, Wakf and Towns on the lines of Revenue land survey that was successfully done recently. He asked the officials to send answers and replies to the MLAs and MLCs, who sought clarifications during the just ended budget session of Assembly and Council. At a high-level review meeting at Secretariat today, Joshi appreciated the Revenue department staff and officials for their persistent efforts to complete the task of completing land cleansing works and submitting report to the government. He instructed the officials to put similar efforts to streamline the data pertaining to the Endowment lands and make them online. He discussed briefly on revenue records updation, T-Web, dash board, pending, LCQ and LAQ and other issues. All the details of the 93 per cent land records of are kept under part-A and others under part-B, he said. The special drive land cleansing survey was conducted from September 15 to December 31 and compiled the data of a total of 2.56 crore acres. The officials should take similar inspiration to complete the process of land records of the Endowment wing, the Chief Secretary said. Dharani website was being maintained for regular updation of the land details. Pattadar pass books are being printed for distribution among the farmers and the land-owners. Joshi asked the officials to speed up the printing of Rythu Bandhu Cheques to distribute Rs 4000 per acre among the farmers in the State. In addition to modernizing the website with all details, the officials are making transparent efforts for data availability and updation. Stating that special norms will be in place for 265 websites of several departments and agencies to remain mobile friendly, the Chief Secretary stressed the need for linking with social media. T Web of IT Department will remain one top shop and to be launched. This site will disseminate information such as department-wise profile, services and schemes and coordinate with the departments by appointing information managers. A plan was on cards that every website will be reviewed with rating, audit works and offer awards for better performance. He asked the departments to link up with dash board to get details of the schemes, programs and plans and add details of hostels, hospitals, double bedroom houses, KCR Kits, human resources, infrastructure, Anganwadis, ration shops. (PMI)