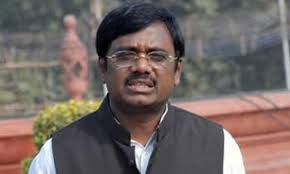 Hyderabad, Aug.9 (PMI): Former MP Vivek Venkatswami has finally joined the BJP bringing curtains to the political speculation that have been going on for a long time. He joined the saffron party in the presence of party’s national president Amit Shah in the national capital. State BJP president Dr K. Laxman, Union minister of home G. Kishan Reddy, party’s National General Ram Madhav and others were present on the occasion.
Vivek Venkatswami won as Congress candidate in the year 2009 from Pedapalli Lok Sabha seat. Later, he took part in separate Telangana State agitation and rebelled against his own party demanding formation of separate Telangana State. Consequently, he was suspended from the party. Later, he joined the TRS and worked for its development. However, he was denied party ticket by party president K Chandrashekhar Rao in the last minute from Peddapalli seat. Hurt by this, he quit the party and set up a foundation called “Venkatswami Foundation”. He took up the controversial issue of the demolition of Erra Manzil heritage building complex and held several awareness programs on the issue. (PMI)