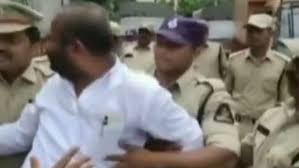 Ashwathama, others Taken into Custody by Police

Hyderabad, Oct.18 (PMI): The police today took into custody the TSRTC JAC convenor Ashwathama Reddy and others at Sudarayya Vignana Kendram in Bagh Lingampally here when they tried to take out a two-wheeler rally to protest against Government’s attitude towards the RTC workers who are on strike.  RTC JAC co-convenor Raji Reddy and  Venkanna were also arrested by the police. Speaking to media, Ashwathama Reddy said that the government should give up its adamant attitude and hold talks with the RTC employees.
At a meeting held earlier, CITU all India vice-president AK Padmanabhan slammed the TRS government for not taking steps to resolve  the RTC staff issues. It is very sad to hear from the Chief minister who had earlier served as the Union  Minister for labour and employment saying that he was unaware of the issues being faced by workers, he added.  He further said that the word ‘self-dismiss’ was not there in the Constitution.