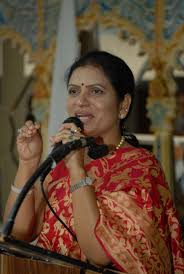 Speaking to the media here on Tuesday, DK Aruna alleged that the TRS government was adopting discriminative attitude in land acquisition. She asked KCR how it was justified in giving Rs 5 to 6 lakh to the farmers, who lost their lands in Palamuru-Rangareddy project in Mahbubnagar when the same government was paying more than Rs 15 lakh to Mallanna Sagar land oustees.  “People are filing cases against the TRS government and not Congress leaders”, she clarified. She also said the State government was giving an impression that the saris produced on powerlooms in Sircilla were handloom saris to distribute them to women during Bathukamma festival.

The former minister also said it was not proper for the Centre to impose 5 percent GST on handlooms and opined that nominal GST was good. She also alleged that the KCR government was showing clear discrimination towards old Mahabubnagar district where handloom industry was big. The language being used by KCR, KTR and Harish Rao was cheap and deplorable. She also faulted KCR to criticize political parties at media conferences at Pragathi Bhavan.