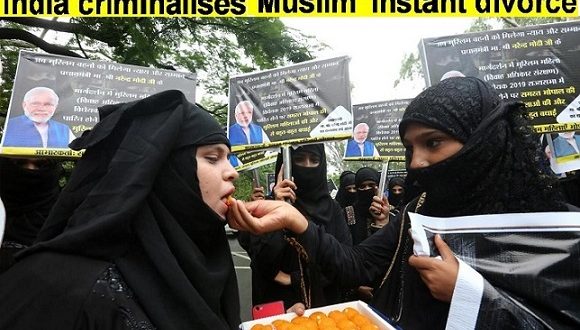 “Triple Talaq”, as it’s known as allows a husband to divorce his wife by repeating the word “talaq” (divorce) three times in any form, including email or text message.

The Supreme Court declared the practice unconstitutional in 2017.

Men found in breach of the new law can be jailed for up to three years. 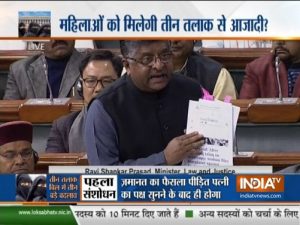 The bill was first tabled in 2017 but stalled in the upper house of parliament, where some MPs called it unfair.

India’s governing Bharatiya Janata Party (BJP) supports the bill, while the main opposition Congress party opposes it but the BJP doesn’t have a majority in the upper house. On Tuesday, the bill was passed by 99 votes to 84 after a number of walkouts and abstentions.

Prime Minister Narendra Modi was quick to celebrate the vote as “a victory of gender justice”, but others accused his Hindu nationalist BJP of targeting Muslims.

Asaduddin Owaisi, an MP from the opposition All India Majlis-e-Ittehadul Muslimeen party, said the new law was another attack on Muslim identity under the BJP, which has been in power since 2014. 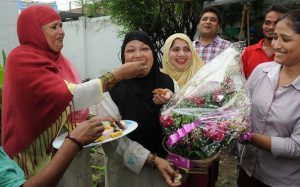 What is instant divorce?

There have been cases in which Muslim men in India have divorced their wives by issuing the so-called triple talaq by letter, telephone and, increasingly, by text message, WhatsApp and Skype. A number of these cases made their way to the courts as women contested the custom.

Triple talaq divorce has no mention in Sharia Islamic law or the Koran, even though the practice has existed for decades.

Islamic scholars say the Koran clearly spells out how to issue a divorce – it has to be spread over three months, allowing a couple time for reflection and reconciliation.

Most Islamic countries, including Egypt, the United Arab Emirates, Pakistan and Bangladesh, have banned triple talaq, but the custom continued in India, which does not have a uniform set of laws on marriage and divorce that apply to every citizen. 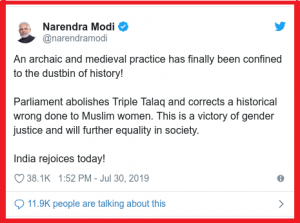 Why is the bill so controversial?

Campaigners and political parties are sharply divided over the bill. Those against it, including some Muslim women, point out that it’s unusual to criminalise divorce.

The Congress party and others have pointed out the practice was already outlawed by the country’s top court. Others have said the state has no place in regulating the marital home but those in favour of the bill say triple talaq is deeply discriminatory towards women.

Law Minister Ravi Shankar Prasad defended the bill, saying the practice had not stopped despite it being banned. He told the Rajya Sabha that some 574 cases were reported after the Supreme Court verdict.

“The judgement has come, but no action on triple talaq has been taken. That is why we have brought this law, because the law is a deterrence,” he said.

Campaigners say it’s almost impossible to quantify how many cases of triple talaq occur in India. 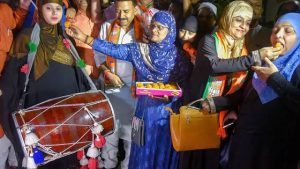 The Supreme Court has declared in majority Judgment that the Muslim men  practice of Instant Triple Talaq or Instant Divorce  by uttering “Talaq” (divorce) three times in one sitting as “Illegal and sinful”. 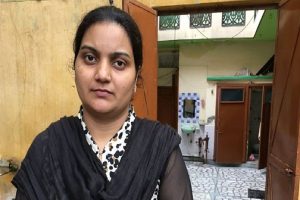 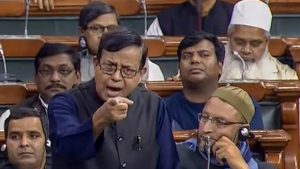 Shia Muslims follow 12 Imams from the descendants of Prophet Mohammed Mustafa (S.A.W.S) after his demise and follow “Fiqh-e-Jaferia” which is according to “Quraan and Sunnat Rasool (S.A.W.S)”. The most significant point here is that there is no difference in interpretation of Islamic Laws (Fikhi-e- Masayal) between 12 Imams. Contrary to this the other group which is known as “Sunni Muslim” have four Fiqhi Imams (i) Imam Abu Hanifa  (ii) Imam-e-Shafai (iii) Imam-e-Hambali (iv) Imam-e-Maliki and all of them has compiled their own Fiqh which is followed by the  respective disciples and there are dissimilarity of  views in Fikah-e-Masayl among  them.

According to Shia Clerics, Fiqha-e-Jaferia has always been against the practice of Triple Talaq (Instant Triple Talaq) as it was not in conformity with Quraan, Shariat-e-Mohammadi (S.A.W.S) and Sunnat-e-Rasool (S.A.W.S). 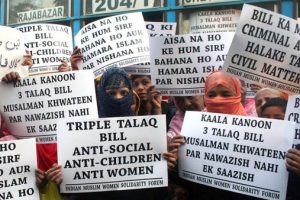 Corresponding to “Fiqh-e-Jafaria”, if the Husband and wife or any one of them do not want to continue their married life and do not want to live together due to the dispute or crises between them on valid reasons then they can get separated, but before they go for divorce by Husband, or wife asking for “Qula”, they are directed to appoint an arbitrator (SALIS) from both side to resolve the dispute and convince them to avoid Talaq. Even after counselling, if the dispute is not solved or husband and wife are not willing to stay together then they can go for divorce or Qula (which is according to Quraan, Shariat-e-Mohammadi (S.A.W.S) and Sunnat-e-Rasool (S.A.W.S). The details of divorce are mentioned in “Quran in Surah No 65” under some conditions husband can give divorce to his wife. 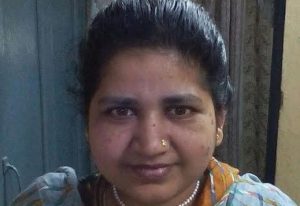 According to “Fiqh-e-Jaferia” husband has to go for first “Talaq-e-Rajaee”.  The period of Eddah   of Talaq Rajaee is three (3) months according to “Quraan Surah No 65” Aayat No 4 and husband should pay Nafkha (Expenditure for three months) to the divorcee. During the“period of  Talaq Rajaee”  if both of  them settle down on compromise  and want to live together as husband and wife within one month of the date of Talaq-e- Rajaee  they can (Rujju)  join and continue their marital states after  over the one month of Talq-e-Rajaee before pronounced “second Talaq Rajaee” they have to go for simply  Aqd-e-Nikah  without “HALALA”,(there is no word  of HALALA use   in Quran  in Ayet No 230 Surah Al-Baqarah)   if the second  “Talaq Rajaee” period  is over both of them did not join each other, and they did  not come down on compromised and do not want  live together then husband has to go for final   Talaq called “Talaq Baeen” and the Eddah  period again  will be three months the expenditure (Nafkha) has to be beard  by husband during Eddah period. 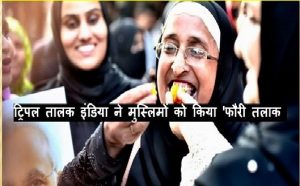 Talaq Rajaee (Rujju) can be given two times   in this both Talaq if Husband or wife settle down their crises problems etc they can join but they have to go for simple Aqd-e-Nikah no need of “HALALA” then after Talaq Baeen (Talaq  Mutlaq) (Final Talaq) can be pronounced and it will be final after “Talaq-e- Mutlaq”. After this they cannot join each other Without Halala. (I will discuss on Halala later in my next article as it is being wrongly interpreted by both Muslims and non-Muslims).

The most important thing is the Talaq given by the husband during the period of pregnancy, the period of “Eddah” is up to delivered the child, during this period all expenditure must beard by husband and mother  is  eligible to demand of remuneration for feeding of milk from father of the new born up to two years. 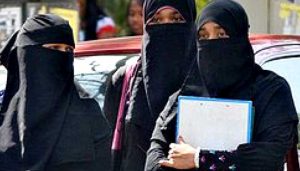 “Talaq Mutlaq” in this stage if both of them or anyone wants to join and wants to live together to continue their married life as husband and wife then “HALALA” is mandatory (Wajib). (It means the divorcee women not restricted to marry other than her  ex-husband but she is not allowed to re-marry her ex-husband until such circumstances she got  married other than her ex  husband, If  he divorce her according to Islamic Talaq Law then she will be  allowed to marry her ex-husband.)     It is a strict punishment in Islamic Law to discourage the Groom and Bride not takes Talaq citing trivial issues and Allah has expressed His dislike for it.

According to Islamic Law the legal rights of Muslim women (divorcee) are as under. 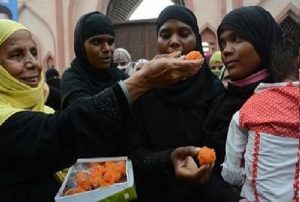 The total expenditure of the children male or female must bear by the father up to attained maturity.

The father of the children has allowed the mother of children to visit with children.

There is an option for custody of the children in case of completed the age of seven years can asked by  children with whom they  like  to live with father or mother  as per their wish custody will be given.

The divorcee can get marry (Nikah) with another person (other than her ex-husband) after over the Eddah Period on her own wish the Islamic Law does not restrict her to go for  marriage and no “Halala” is required.

The institution of Marriage and Divorce has been magnificently reveled in the Quran by Allah (JJH) and exemplarily explained and implemented by Prophet Mohammad (S.A.W.S) to the Ummah, and there is no such spiritual complete Divorce law in any other Religion except Islam. 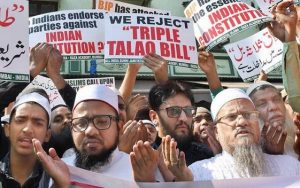 There is no injustice with Muslim women during or after divorce if men follow divorce procedures according to Islamic Law and Quran. Since there are no Islamic courts “(Shara-e-Adalat)” running in the country, Muslim Women are approaching Indian Judiciary for justice? If the Indian government is really concerned about Muslim Women then government shall introduce strict law to received Nafqa and expenditures of the children if they live with mother after divorce,   and punishment like fine and (imprisonment)   for “QAZI” who recite  the Aqd-e- Nikah of the men who did not paid the “Nafqa” and not paying the expenditures of the children and  don’t abide by the procedures to give divorce as per Quran and Islamic Law.

The Highest Judiciary of the Country Supreme Court of India on 22 Aug has passed the Judgment in favor of Muslim Women stand against the practice of instant Triple Talaq by Muslim Men. 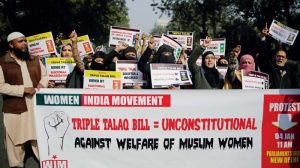 On 22 Aug it was seen in TV Channels debates that the Muslim Women who have filed cases against the practice of Triple Talaq (Instant Triple Talaq), anchor and the participant who does not belongs to Muslim community were very happy that they have won the case, and it is a victory of the Indian Government and non-Muslims supporters of Indian Muslim women over the Islamic Law and Shariat-e-Mohammadi (S.A.W.S), but it is not like that.

First of all let it be crystal clear that Muslim women petitioners who did not surrendered themselves before the stubborn Clerics and maintained strong stand and played a pivotal role on the issue of Triple Talaq practiced by Muslim men and stand of Clerics of certain sects of Islam. They were supported by some vested religious groups and Government. 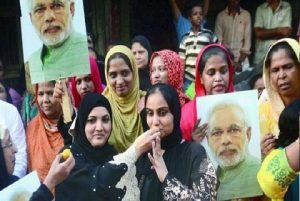 The majority of the Muslim community would like to emphasize the point that the victory is over the certain views and wrong interpretation of “Instant Triple Talaq” which is practiced by some Muslim men with the support of some stubborn or aggressive clerics of some sects. The Supreme Court verdict in favour of Muslim Women and Government of India should not be deemed as a victory against Islam, Quraan and Shariat-e-Mohammadi (S.A.W.S) in the light of above mentioned details of Talaq Law and procedure with references of Quran and Sunnah.

The participant of the TV Channels debates are requested to study the History of Islam, and Quran they will not find any procedure of Triple Talaq (Instant Triple Talaq) even in“Fiqh-e- Jafery” or in Sunni cleric of Tafseer in respect of Triple Talaq practice by some Muslim men.

The persons who are against the Islamic Law of Talaq (Divorce) must study “Quraan” particularly Surah Altalaq (No 65) Surah No 2 Surah No 4   and Surah No 33 in which they will find that Islam justifies with both the husband and wife and if they are not convinced with Islamic Talaq Law they are invited to show spiritual law of Talaq in any other Religion.