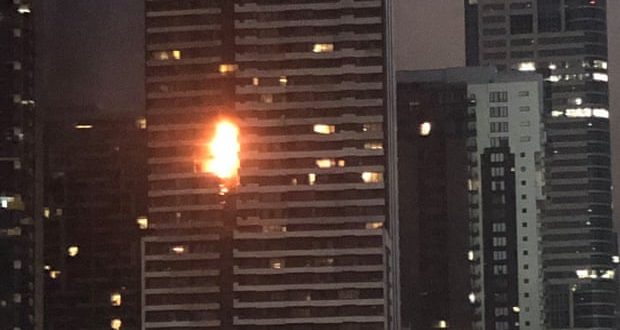 Eighty firefighters were deployed to a building in Melbourne’s Spencer Street on Monday morning to battle a blaze that has prompted fresh concerns about combustible cladding on apartment buildings.

The fire began shortly before 6am and shot up several floors of the apartment complex, prompting the Metropolitan Fire Brigade to upgrade the emergency.

The fire brigade said the fire had started on the 22nd floor and quickly moved up the outside of the tower to the 27th floor.

Ambulance Victoria said paramedics had treated one man in his 20s for smoke inhalation. He was taken to Royal Melbourne hospital in a stable condition.

Victoria police were assisting with the evacuation and relocation of residents.

Dan Stephens, the chief officer for the Metropolitan Fire Brigade, said crews believed the building was clad in the same material as the Grenfell Tower in London, which caught fire in 2017 and killed 72 people.

“My understanding is that the building is cladded with aluminium composite materials, so the cladding that was on the Grenfell Tower,” he said.

Trent Curtin, the assistant chief officer of the brigade, said sprinklers had activated on four of the floors and contained the fire to the balcony and apartment.

Firefighters had undertaken an “internal fire attack”, fighting the fire directly inside the building.

“The fire escalated quite rapidly from the 22nd floor,” Curtin said. “We can assume, but can’t confirm, that the cladding escalated the speed of the fire.”

Fire safety inspectors, investigation specialists and the Melbourne city council municipal building surveyor are on site and working to determine the cause of the blaze.

Curtin said crews had already identified potential fire safety issues with the building, including that some residents had covered their smoke alarms with plastic.

“One of those issues is that occupants have been covering smoke alarms with plastic to stop them going off from cooking or false alarms,” he said. “There’s potentially others [fire safety issues] but we’re unclear at this stage.”

Curtin said crews had also encountered residents who refused to evacuate from the building.

The complex has 371 apartments and, at 10am, Curtin said crews were still struggling to get some people to leave. “Firefighters went floor to floor in the early stages of the fire,” he said. “Even with a notification to evacuate, some people refused to evacuate.”

Spencer Street was initially closed in both directions and a spokesman for the fire brigade said crews had been able to bring the fire under control by 7am.

By 10 am the street had reopened in a northbound direction. The fire brigade expects crews to be on site for most of the day.

The Age was reporting that pieces of the building could be seen falling from the complex on the corner of Bourke and Spencer streets.

“Crews were alerted to the blaze at 5.43am and the incident was quickly upgraded after the building was noted to have combustible cladding,” the Metropolitan Fire Brigade said in an initial statement.

A state audit found that about 1,400 planning permits may have had non-compliant cladding and about 200 buildings had combustible cladding.

… we’re asking readers to make a new year contribution in support of The Guardian’s independent journalism. More people are reading and supporting our independent, investigative reporting than ever before. And unlike many news organisations, we have chosen an approach that allows us to keep our journalism accessible to all, regardless of where they live or what they can afford. But this is only possible thanks to voluntary support from our readers – something we have to maintain and build on for every year to come.

In these critical times, when some try to divide us by building walls and create disorder through false information, The Guardian is committed to keeping access to our journalism open – so everyone, around the world, can be well informed. Readers’ support powers our work, giving our reporting impact and safeguarding our essential editorial independence. This means the responsibility of protecting independent journalism is shared, enabling us all to feel empowered to bring about real change in the world. Your support gives Guardian journalists the time, space and freedom to report with tenacity and rigor, to shed light where others won’t. It emboldens us to challenge authority and question the status quo. And by keeping all of our journalism free and open to all, we can foster inclusivity, diversity, make space for debate, inspire conversation – so more people, across the world, have access to accurate information with integrity at its heart. Every contribution we receive from readers like you, big or small, enables us to keep working as we do.

The Guardian is editorially independent, meaning we set our own agenda. Our journalism is free from commercial bias and not influenced by billionaire owners, politicians or shareholders. No one edits our editor. No one steers our opinion. This is important as it enables us to give a voice to those less heard, challenge the powerful and hold them to account. It’s what makes us different to so many others in the media, at a time when factual, honest reporting is critical.

Please make a new year contribution today to help us deliver the independent journalism the world needs for 2019 and beyond.