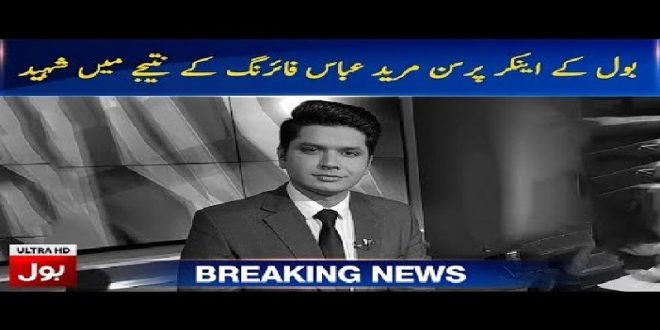 MELBOURNE/ KARACHI: Another Shia journalist Mureed Abbas and his friend were murdered in Karachi on Tuesday night.

Abbas who was an anchor person working at a private television channel Bol News in Karachi was allegedly shot by Atif Zaman who also tried to commit suicide by shooting himself. He was later admitted to a local hospital with critical injuries, according to Karachi police. 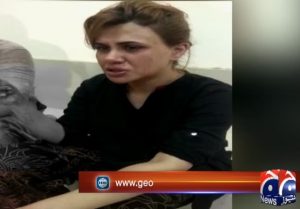 Abbas’s friend Khizar Hayat was also shot on the spot and he later succumbed to injuries in a hospital.

As usual and as routine Karachi police officials said, citing initial details, that he was killed during a fight over a ‘personal dispute’ over some business investment which went wrong, sources reported.

Initial investigation suggested that the accused Zaman had to pay back a debt to the TV anchor. It is also believed that the alleged killer had threatened him of dire consequences. 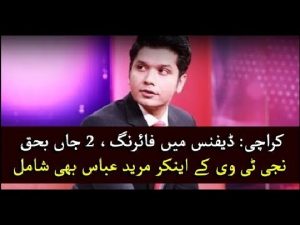 Zaman had called the victim to a cafe in a posh area of Defence in Karachi and gunned down Abbas and his friend.

A video of the anchor’s wife Zara Abbas has gone viral on social media where she claims that the accused Zaman had called her husband at 8pm to collect Rs5 million owed to him.

“We had invested our money in his business and he (Zaman) wasn’t giving it back to us and others, he would always make excuses,” she said. 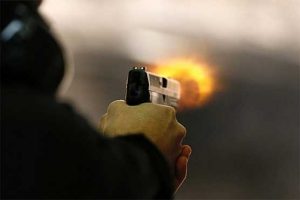 Karachi South Deputy Inspector General (DIG) Sharjeel Kharal said that friends of the deceased informed the police that he had a monetary dispute with someone.

The officer said that a police party raided the residence of the suspected killer and caught him attempting suicide. “The suspect shot himself in the chest,” he said, adding that the suspect was shifted to a local hospital in critical condition.

Senior Superintendent of Police (SSP) South, Sheraz Nazir said that the investigators are probing the element of personal enmity as the deceased journalist, earlier, filed a police complaint against few individuals.

Meanwhile, political leaders in Pakistan has condemned the killing of Abbas and sent condolences on his death.

In a tweet, Mariam said: May Allah’s blessings with him and his family, rest in peace.

Haleem said the government firmly stand with the deceased family on the moment of sorrow and mourn. 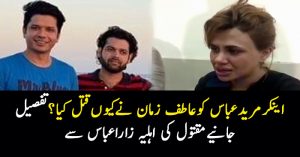 PML-N leader Marriyum Aurangzeb also condemned the killing of anchorperson and pray for eternal peace for his soul. She demanded that the government should take concrete and effective measures to protect the life of journalists.

PML-N leader Marriyum Aurangzeb also condemned the killing of anchorperson and pray for eternal peace for his soul. She demanded that the government should take concrete and effective measures to protect the life of journalists. 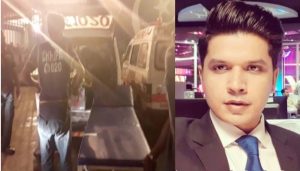 As a reputable Pakistani English daily “Messenger” has been publishing since a long that neither Shia journalist nor lawyers, doctors even general unknown or ordinary citizens are safe in Karachi just because of their sect and belief and over dozens of Shia journalists, doctors, lawyers, priests, Nauha-Khawan, Azadar, teachers and students have been forcibly missed, abducted or killed in current year as like as been heppening in past but neither none of one culprit arrested nor the series of Shia target killing could be stopped even the wave of Shia murders and missing would be controlled as claimed by the LEAs.

Messenger has also been flashing and highlighting through its routine and exclusive news stories during the last 10 years, that who were involved in such crimes, who are culprits, their networks, their supporters, facilitators and sponsors while the existence of Daesh, ISIL, ISIL, Lashkar-e-Jhangvi, Sipah-e-Sahaba, Jamat-e-Islami, al-Qaeda, Taliban and many other defunct/ banned local, national and international organizations but no remarkable action has been taken until today and on the other hand the LEAs as well as present and former governments even  secret agencies and security forces have being issued fake and incorrect handouts, press releases and verbal and written statements that they have controlled the law and order situation in country particularly in Karachi just to get rid of with sanctions and other restrictions and they always tried to make fool Pakistani nation as well as world especially neighboring countries but the reality is quite different with truth, sources firmed.

Post Views: 8
2019-07-10
admin
Previous Minaj quits Saudi festival to show support for women’s right
Next ‘Sridevi’s death was not accidental, but a murder’