Another Pakistani female human rights activist flees to US 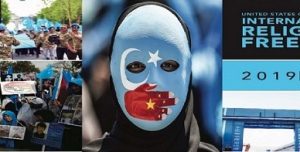 MELBOURNE/ NEW YORK: Ultimately, another Pakistani ‘female’ human rights activist would have to leave the country just because of direct ‘state terrorism’ and if she further remains in nation yet, she must be either murdered, ‘enforced disappeared’, kidnapped or detained against false cases especially under blasphemy sections (traditionally) and at last like many previous stories, once again, one more Messenger/PMI report proved 100% correct regarding the violence against women, kidnapping, enforced disappearing, suspicious missing, arresting and abusing particularly “female target killing” in Pakistan but when the said reports were being published (during the period of last one and half year) neither the Pakistani government nor none of one country’s Law Enforcing Agency (LEA), no security or secret force, NGO, national or int’l human rights organization even Pak media was ready to accept, acknowledge, verify, consider and endorse those reports like the ‘other thousands’ but with the passage of time (later on), not only the national media but also some ‘groups’, LEAs, NGOs, human rights networks, individuals, authorities, general people and

It is very shameful for those they always either remain impress with “bigger”, or are biased, uneducated, immature, unaware or have no urge to face reality, truthiness, facts or support, facilitate, sponsor, companion and finance criminals and terrorists, legend journalists, prominent human right objectors, in-service and former national and global high-ups, immigration authorities and sources said, firmed and claimed.

Definitely, opponents, claimers, ‘intellectuals, blamers and critics would be surprised (formally) and certainly will ask too that what does it means and in which context this report is published and how can PMI claim as it mentioned but simply we advise all of them to please visit pressmediaofindia.com and see Messenger’s achieve.

Conclusively, BBC reports; a prominent Pakistani human rights activist, Gulalai Ismail, has fled to the US, after months in hiding.’

“The last few months have been awful. I have been threatened, harassed, and I am lucky to be alive,” she said in a statement.

She did not reveal how she left the country, given she was under a travel ban, but told The New York Times: “I didn’t fly out of an airport.”

Ms Ismail is accused of “anti-state activities” and “inciting violence”.

Reports said the 33-year-old was now in New York with her sister, and has requested political asylum.

Who is Gulalai Ismail?

For many years, Ms Ismail has been an outspoken critic of human rights abuses, especially against women and girls.

From the province of Khyber Pakhtunkhwa, she founded an NGO at the age of 16 called Aware Girls to educate young girls about their rights. Soon afterwards, she was told a story of a young boy who had been brainwashed into joining a militant organisation and decided to expand her work to combat radicalisation.

In 2013, she created a team of 100 women to work on issues such as domestic violence and underage marriage.

She has received several awards for her work.

How did she get out of Pakistan?

Ms Ismail was placed on the government Exit Control List, which meant she was banned from leaving the country.

She has not revealed much information about how she escaped, saying only that she did not fly.

She arrived in the US via Sri Lanka, where Pakistani citizens can travel visa-free, she told Radio Free Europe.

The campaigner gave very few details of her time in hiding or her escape because she said she feared it could “endanger people who helped me hide and exit the country”, according to The New York Times.

Her father, Muhammad Ismail, told BBC Urdu that Ms Ismail had six cases filed against her in the Pakistani courts. And that she had decided her life was in serious danger.

What led to her leaving?

Ms Ismail has known for some time that her work may put her and her family in danger, but she told the BBC in 2014 that it was part of the life she had chosen.

“It is also a sign that my work is having an impact,” she said. “Just two months back my family was attacked, and we were threatened if we did not stop what we were doing we will be attacked again.

“But it is part of the change process, part of the struggle, and it has made me more committed.”

However, in the last year she has found herself in trouble with Pakistan’s authorities.

She was first arrested at Islamabad airport while returning from London in October 2018. At the time she was among 19 people charged with making anti-state, anti-military speeches at a rally

held by the Pashtun Tahaffuz (Protection) Movement, or PTM, in Swabi in August 2018.

In February of this year she was again arrested in Balochistan province during a protest over the death of PTM activist Arman Luni, who died in custody. Police deny they beat him.

In May, she was charged with incitement “against the state and other nationalities” during a protest over the rape and murder of a 10-year-old Pashtun girl, Farishta, in an Islamabad suburb.

She had been in hiding since, while the police conducted raids around the country in a fruitless search for her.

Post Views: 36
2019-09-20
admin
Previous SC to hear Ayodhya case for an hour more from next Monday
Next Multiple casualties in bus bombing outside Karbala