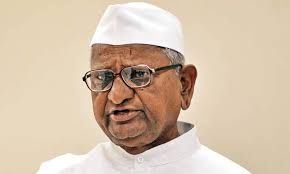 Hyderabad, Jan.19 (PMI): Lauding the Telangana Government for helping the farmers in the state, renowned Gandhian Activist and Padma Bhooshan awardee, Anna Hazare today said that the Centre should replicate it across the states. Anna Hazare was addressing a Telangana Jagruthi International Youth Leadership Conference (TJIYLC), at HICC here along with MP Kavitha and others. He said that only those who serve the society and Nation, and not millionaires, are remembered by generations.

On the occasion,  Hazare praised the state government for its insight and plan to provide financial succor to destitute farmers in the state. This scheme is a ray of hope for the entire farming community and helping them financially is unheard of, he said. Since several states are implementing similar schemes, the Centre should replicate Rythu Bandhu across the nation, he suggested. He also praised Chief Minister K Chandrasekhar Rao for efficient leadership to make the state number one in the country. Rythu Bandhu scheme is like a light house at the sea and is essential for the farmers to check extreme steps and instead focus on farm production. Plan, marketing, water supply for crops and timely financial help to the farmers will help them develop. He flayed the centre for helping the businessmen and telling lies on Vishwanathan Commission recommendations to help the farmers. The governments are ignoring the problems of the farmers,  he added.

Kavitha said that  efforts are being made for stable government to achieve inclusive growth. She said that the conference will deliberate on problems of society caused by mankind. About 22000 children losing their lives every year across the world and youth has to play a united role to check the problems and issues. She sid youngsters across  the globe were facing different problems, like unemployment, drug abuse, mental disorders,  she said, adding that TJIYLC is first step towards networking  the organizations  in different countries and to nurture  the youth in addressing  these issues.

During a panel discussion as part of the TJIYLC, Hyderabad MP Asaduddin Owaisi said Kashmir was and would remain an integral part of India and wanted Pakistan to stop meddling with the Kashmir issue.             The conference, on theme of inclusive growth in Gandhian path and inventions, was attended by 550 delegates from 135 nations.(PMI)