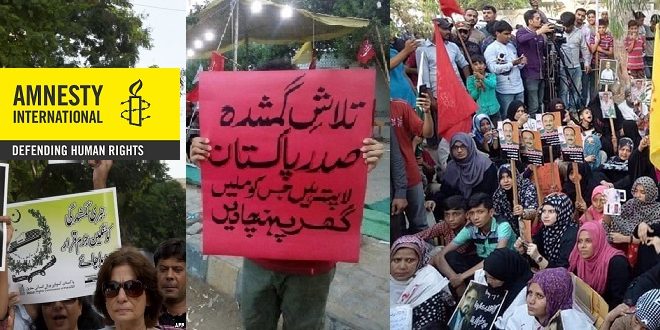 LONDON: “We are repeatedly given advice that if we stop protesting, end our activism against enforced disappearances and sit at home, our Baba will come back.”

In April 2017, Hidayatullah Lohar, school teacher (headmaster), blacksmith and political Sindhi activist was forcibly disappeared from the school where he taught. He was taken away in a “double-cabin grey coloured” vehicle by men in police uniform and civilian clothes. Since then the authorities have refused to disclose his whereabouts.

Despite the presence of eye-witnesses, his family had to petition the Sindh High Court (Larkana Bench) to order the area police station to register the First Information Report (FIR).

Hidayatullah Lohar is one of Sindh’s “missing persons”. His family has been patiently seeking truth and justice through the courts and on the streets of Pakistan since his disappearance. His daughters, Sasui and Sorath Lohar are at the forefront of the campaign against enforced disappearance in the southern province of Sindh. Lohar’s case was also registered in the Commission for Inquiry of Enforced Disappearances of Pakistan (COIED) and a number of Joint Investigation Team (JIT) (appointed by the COIED) hearings have taken place in the province on the commission’s order but to no effect. The JITs comprise of government stakeholders, including the interior ministry, police officials, federal investigation agency officials and intelligence agencies.

Enforced disappearances have long been a stain on Pakistan’s human rights record. Despite the pledges of successive governments to criminalize the practice, there has been slow movement on legislation while people continue to be forcibly disappeared with impunity.

The Commission of Inquiry on Enforced Disappearances (COIED) has 2178 cases unresolved as of now. As per the Commission’s recent monthly report 48 cases disposed of in the month of January 2019, including 46 traced persons out of which 29 were returned home, 10 were traced to internment centers, five are in jails on terrorism charges and two were described as “dead bodies”. The UN Working Group on Enforced or Involuntary Disappearance has more than 700 cases pending from Pakistan. The numbers of cases of victims of enforced disappearance recorded by victim groups are much higher. Victim groups and the civil society have serious concerns with regards to the effectiveness of Pakistan’s COIED, primarily that it is not using its powers to investigate and hold the perpetrators accountable and that it does not have civil society or the victim groups’ representation on its board.

The groups and individuals targeted in enforced disappearances in Pakistan include people from Sindhi, Baloch, Pashtun ethnicities, the Shia community, political activists, human rights defenders, members and supporters of religious and nationalist groups suspected members of armed groups and proscribed religious and political organisations in Pakistan.

In some cases, persons are openly taken into custody by the police or intelligence agencies, and families trying to find out where they are held are denied information by the authorities. Some victims are eventually released or their whereabouts are disclosed to their families but they continue to be held in arbitrary detention including in internment camps. Those forcibly disappeared are also at risk of torture and death during captivity.

PROMISES BY THE GOVERNMENT

The new government of Prime Minister Imran Khan has committed to criminalizing enforced disappearances. In January 2019, Pakistan’s Ministry of Human Rights submitted a draft bill to the Ministry of Law and Justice to criminalize enforced disappearances, through an amendment in the Pakistan Penal Code. Shireen Mazari, the Minister of Human Rights has also stated that the government wants to sign the International Convention for the Protection of All Persons from Enforced Disappearance. While criminalization of enforced disappearance is an important and positive first step in ending these ongoing human rights violations, the process has not included consultations with civil society groups and victims’ families.

In recent months, there have been encouraging reports of people released. Voice of Baloch Missing Persons (VBMP), a human rights organization working on enforced disappearances from the Balochistan province told Amnesty International that 65 forcibly disappeared persons whose cases were registered with them have been released so far, this year.

However, when the forcibly disappeared are released, they are either warned to not speak to the media and seek accountability or the fear of recurrence stops them from speaking up about their disappearance. Therefore, seeking justice is not an option for the released victims and their families.

Families of the disappeared are often threatened, harassed and intimidated, especially those whom have been more public with their protests and have campaigned openly for justice for their loved ones.

While marching against enforced disappearances, Sasui and Sorath Lohar have spent Eids in hunger strike camps outside the Karachi Press Club with other families of the “missing persons”, as the victims of enforced disappearance are commonly referred to in Pakistan. In May 2018, during a violent dispersal of the protest, they were part of in Sindh, Sasui says she was assaulted by a law enforcement officer. In November 2018, a peaceful march of the missing persons of Sindh was interrupted repeatedly by the Sindh Rangers and by officials in plain clothes – who are thought to be from the intelligence agencies.

On 12 January 2019, Sindh Rangers attempted to detain one of Lohar’s sons, Sanghaar Lohar, without search warrants, from his mobile shop in Karachi. The sisters and mother resisted and raised enough noise to gather neighbours and managed to halt the detention. The video evidence of the entire incident shows men in uniform claiming that their brother was involved in wrongdoing, without specifying any allegations or charges.

In 2017 and 2018, the family of the blogger Ahmad Waqass Goraya was repeatedly harassed by intelligence agencies. In 2017, Goraya was forcibly disappeared from January 4 till January 27, along with three other bloggers in Punjab for running Facebook pages critical of Pakistani military’s policies. Goraya’s father, Liaqat Goraya told Amnesty International that they were continuously under surveillance and felt like their house was watched.

Families of the disappeared suffer significant harm. They live with continuous uncertainty about the fate or whereabouts of their loved ones and their lives are often utterly disrupted by the disappearance. For instance, while waiting for their missing loved one, Lohar’s mother died during her son’s disappearance. The parents of Masood Ahmad Janjua, one of the emblematic cases of enforced disappearance from the country also passed away during his disappearance. Political activist Shahid Junejo’s mother kept asking about her son but is gone now while he is still missing. Another Sindhi activist, Aftab Chandio’s family sat with the dead body of his father and demanded that Aftab was permitted to say his funeral prayer.

Lohar’s wife told Amnesty International, “It feels like our lives have gotten stuck in a moment and not moving forward. We cannot take any decisions about our lives, my children cannot get married, and their lives have come to a halt.”

In addition to the sudden financial burden as Lohar was the primary income earner for his family, not knowing the fate and whereabouts of their loved ones also takes a huge emotional toll on the health of the families. Women from the families of the victims that publicly campaign for truth and justice are regularly subjected to gender-based harassment both online and offline while the families of the disappeared want their loved ones released, they also want the perpetrators brought to justice. Sasui Lohar told Amnesty International, “missing relatives should come back but justice is incomplete without perpetrators being held to account.”

Amnesty International calls on the Pakistan government to: