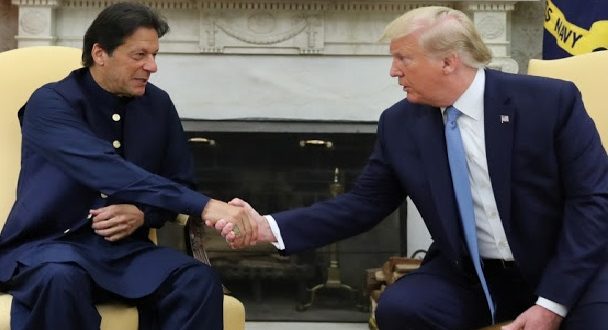 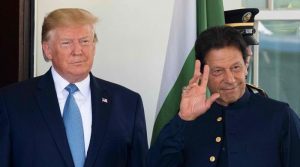 WASHINGTON/ ISLAMABAD: US President Donald Trump on Monday offered to mediate the Kashmir dispute between India and Pakistan as he hosted Prime Minister Imran Khan at the White House.

After shaking hands and pausing for photos, as a large number of Pakistani-Americans gathered outside, Trump welcomed Khan into the White House.

The Pakistani leader held a one-on-one meeting with the US head-of-state, wherein the latter offered to mediate the Kashmir dispute between India and Pakistan. 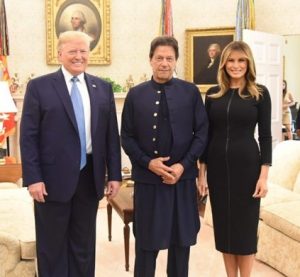 “I will say that we have a very good relationship with India. I know that your relationship was strained a little bit … maybe a lot,” Trump said. “But we will be talking about India, it will be a big part of the conversation today.”

“If I can help, I would love to be a mediator. If I can do anything to help, let me know,” the US president added.

In addition, Khan said: “The USA is the most powerful country in the world and it can play a very important role for peace in the subcontinent.

“Over a billion people at moment are held hostage to Kashmir situation and I believe that President Trump can bring two countries together,” the PM added.

After the one-on-one meeting, there would be an “extended meeting”, wherein Chief of Army Staff (COAS) General Qamar Javed Bajwa and other military leaders will also be present. 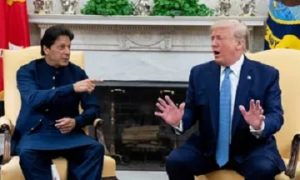 Earlier, Foreign Minister Shah Mahmood Qureshi had said in a Twitter post: “The Prime Minister of Pakistan is here to showcase his vision of a “Naya Pakistan” and to start a new era of bilateral relations.”

“We have come with a narrative of peace and prosperity in the region,” Qureshi had added.

Khan’s first visit to the White House since taking power may potentially improve the bilateral ties between the strategic allies, according to the Trump administration.

The visit, the Trump administration added, would create a stable partnership between the two countries and strengthen ties.

According to the White House, the two leaders would focus on the strengthening of cooperation between Washington and Islamabad to bring peace, stability, and economic prosperity to a region that has seen far too much conflict.

The two leaders would discuss several issues during their meeting, including “counterterrorism, defence, energy, and trade, with the goal of creating the conditions for a peaceful South Asia and an enduring partnership between our two countries. 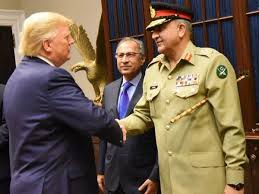 COAS Gen Bajwa, on the other hand, was set to travel to the Pentagon at 3PM (local time), where he would be received by General Joseph Dunford, the incumbent Chairperson of the US Joint Chiefs of Staff.

Speaking at the Pakistani Embassy in Washington, Major General Asif Ghafoor, the director-general of the Inter-Services Public Relations (ISPR), confirmed that Chief of Army Staff (COAS) Gen Bajwa would be part of PM Imran’s delegation during the meeting with Trump.

Maj Gen Ghafoor told the media that the Army Chief would also visit the Pentagon to have interaction with US military leadership. 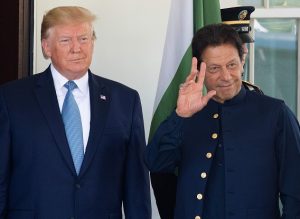 Earlier on Monday, US Republican Senator Lindsey Graham called on Khan at the Pakistan House here in Washington.

The head of the US Senate Judiciary Committee and a member of the Senate Foreign Relations Committee, Graham “has been the most vocal and active supporter of refreshing US-Pakistan bilateral ties in the interest of regional peace and security”.

Terming the meeting with Khan as “great”, the US senator in successive tweets said: “In my opinion he and his government represent the best opportunity in decades to have a beneficial strategic relationship the US.

“This will help us secure Afghanistan and the region long-term.

“Tremendous business opportunities exist between Pakistan and the US through a free trade agreement tied to our mutual security interests. It’s also our best chance in decades to reset the relationship between the US and Pakistan,” he added.

The US senator further wished Khan well for his forthcoming meeting with Trump. 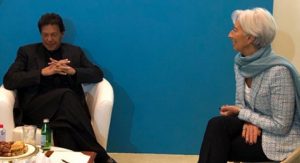 Earlier, upon his arrival in Washington for the first-ever, three-day visit to the US, Khan was given a warm welcome by senior officials of the US Department of State. He was accompanied by Foreign Minister Shah Mehmood Qureshi, Foreign Secretary Sohail Mahmood, Adviser on Commerce Abdul Razzaq Dawood, and Pakistan’s Ambassador to the US, Dr Asad Majeed Khan.

When the premier reached the Embassy Residence, he was given a glorious welcome, with the Pakistani community and fans playing the dhol. Khan will be staying in Pakistan House.

The PM has a tight schedule in the US capital today as he would be meeting the IMF’s interim managing director, World Bank President David Malpass, and the Pakistani-American business community.

Khan is also set to participate in the Pakistan Business Summit, where he would be giving an address as well.