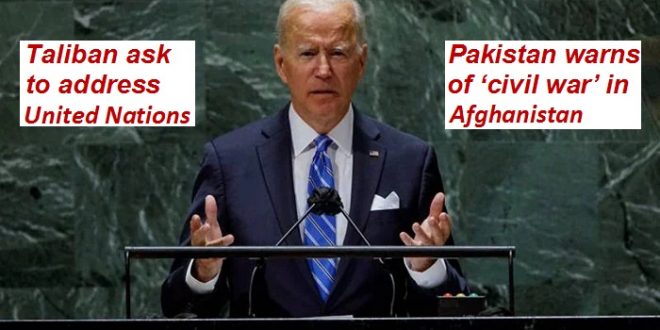 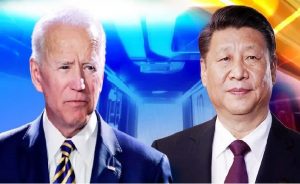 UNITED NATIONS/ KABUL/ ISLAMABAD: President Joe Biden told the world Tuesday the United States is not seeking a new Cold War with China, as he vowed to pivot from post-9/11 conflicts and take a global leadership role on crises from climate to Covid-19.

The Biden administration has identified a rising and authoritarian China as the paramount challenge of the 21st century, but in his debut address to the annual UN summit, Biden made clear he was not trying to sow divisions.

“We are not seeking a new Cold War or a world divided into rigid blocs,” Biden said.

“The United States is ready to work with any nation those steps up and pursues peaceful resolution to shared challenges even if we have intense disagreement in other areas.”

Biden did not mention China by name, other than voicing alarm about human rights in Xinjiang, where experts say more than one million people from the Uyghur and other mostly Muslim populations are incarcerated. 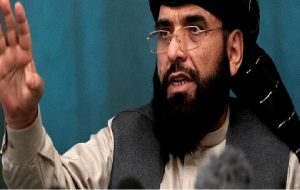 Biden declared himself to be the first US president in 20 years not to be running a war after his controversial pullout of troops from Afghanistan, where the Taliban swiftly took over.

Instead, America is “opening a new era of relentless diplomacy,” Biden said, vowing to work closely with allies.

Speaking from the General Assembly rostrum from which previous US presidents, including George W. Bush, have lobbied for military action, Biden said the use of force must be a “tool of last resort.”

Xi, addressing the summit in a recorded video, similarly made no direct mention of the United States, but called for “mutual respect” among powers and said that “democracy is not a special right.”

His announcement came after Biden promised to double US climate aid to hardest-hit nations to an estimated $11.4 billion a year, making headway on a key gap ahead of a high-stakes UN climate conference in Glasgow in November. 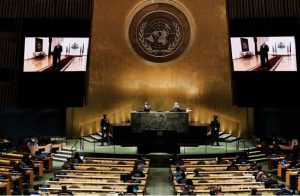 Secretary-General Antonio Guterres hailed the two announcements. But he earlier urged dialogue between Washington and Beijing, as he warned that the world was drifting toward two different systems.

“This is a recipe for trouble. It would be far less predictable than the Cold War,” Guterres said.

The UN General Assembly is meeting in person for the first time in two years but at limited capacity and with pandemic precautions.

The measures include replacing the microphone after each speaker — likely welcome news for the 78-year-old Biden, who spoke after Brazilian President Jair Bolsonaro, who defied guidance only to attend if vaccinated against Covid-19.

Biden has called a virtual summit on Wednesday on defeating the pandemic and has teased “additional commitments” reported by US media to be the purchase of an extra 500 million vaccine doses to donate overseas.

Biden will end a busy diplomatic week with an unprecedented four-way summit at the White House with the leaders of Australia, India and Japan, the so-called “Quad” widely seen as a united front against China. 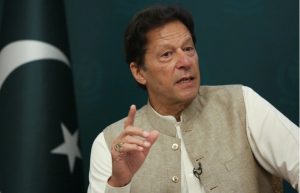 Biden met in New York with Australian Prime Minister Scott Morrison but his efforts to shore up alliances have suddenly faced a major hurdle, France.

Paris recalled its ambassador to Washington in fury after Australia canceled a multibillion-dollar contract for French conventional submarines in favor of US nuclear versions as part of a new alliance announced with Washington and London.

French Foreign Minister Jean-Yves Le Drian has said he will not meet one-on-one in New York with US Secretary of State Antony Blinken, and has described Biden’s diplomatic style as “brutality.”

The White House appears confident it can calm the spat, with Biden set to speak by telephone to French President Emmanuel Macron, who is not attending the General Assembly due to Covid-19 precautions but German Foreign Minister Heiko Maas, who openly rejoiced in Biden’s defeat of Donald Trump, voiced solidarity with France and called the submarine decision “disappointing.”

“I was never under any illusion that we wouldn’t have problems with the new American president,” he told reporters. 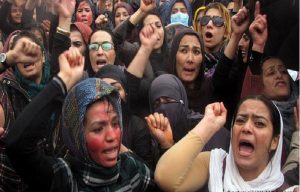 The ambassador of the Afghan government ousted by the Taliban last month has also requested to speak, with the UN yet to decide who will represent the country at the world body.

A nine-member credentials committee will now rule on the dueling requests, UN spokesman Stephane Dujarric told media, but it is unclear whether the committee will meet before the end of the convocation on Monday.

It was dated Monday September 20 — the day before the session got underway — and listed Muttaqi as “Minister of Foreign Affairs,” he added.

The letter did not specify whether Muttaqi wanted to travel to New York to speak or whether the Taliban would submit a recorded video message, as many leaders are doing this year due to COVID-19.

The letter also indicated that Ghulam Isaczai “no longer represents” Afghanistan at the United Nations.

He was the ambassador to the UN of the Afghan government ousted from power in August as US military troops exited the country, ending their 20-year war. 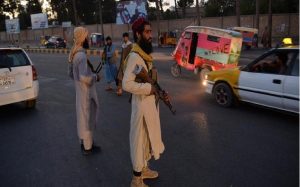 The letter said that the Taliban had nominated their Doha-based spokesman Suhail Shaheen as Afghanistan’s permanent representative to the UN.

The note, which had the letterhead “Islamic Emirate of Afghanistan, Ministry of Foreign Affairs,” said that former president Ashraf Ghani was “ousted” on August 15, the day he fled the country.

“Countries across the world no longer recognize him as president,” the letter said, according to the UN.

The UN spokesman also said that Secretary-General Guterres had received a separate letter from Isaczai, dated September 15, containing the list of Afghanistan’s delegation for the session.

The committee is made up of Russia, China, the United States, Sweden, South Africa, Sierra Leone, Chile, Bhutan and the Bahamas. 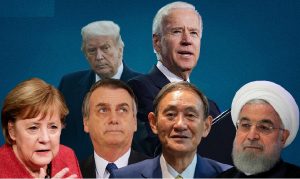 The committee has in the past refrained from making a decision and instead referred it to the General Assembly for a vote, a diplomatic source told media.

No government has yet recognized the Taliban government, first demanding that it meet commitments on human rights, but some have made positive noises.

“The pragmatic, political view is that there is a new reality. And if you want to ignore that, that’s your choice,” Foreign Minister Shah Mahmood Qureshi told reporters Monday, stopping short of calling for legal recognition.

Earlier, Pakistani Prime Minister Imran Khan has warned of the risk of a “civil war” in Afghanistan if the Taliban is unable to form an inclusive government there.

“If they do not have an inclusive government, and gradually it descends into a civil war, which if they do not include all the factions sooner or later (will happen), that too will impact Pakistan,” Khan told the BBC network during an interview aired on Tuesday.

Khan said his country was primarily concerned about the possibility of a humanitarian and refugee crisis if a civil war breaks out, as well as the possibility of Afghan soil being used by armed groups that are fighting the Pakistani government. 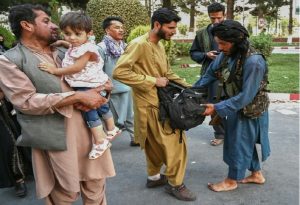 “It will mean an unstable, a chaotic Afghanistan,” he said.

“(That is an) ideal place for terrorists, because if there is no control or if there is fighting going on. And that is our worry. So terrorism from Afghan soil, and secondly if there is a humanitarian crisis or a civil war, a refugee issue for us.”

The Taliban has previously rejected Khan’s calls for changes to the current interim Afghan government, with Mohammad Mobeen, a Taliban leader, saying the group does not “give anyone the right to call for an inclusive government”.

“We have got freedom. Like Pakistan, we reserve the right to have our own system,” Mobeen said told Afghanistan’s Ariana TV on Monday, adding the current system was “inclusive”.

Also on Monday, the Taliban’s deputy information minister Zabihullah Mujahid said the group would address international human rights concerns only after formal recognition by those countries.

“As long as we are not recognized, and they make criticisms [over rights violations], we think it is a one-sided approach. It would be good for them to treat us responsibly and recognize our current government as a responsible administration,” Mujahid told Afghanistan’s Tolo News. 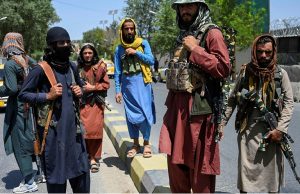 Pakistan’s government led by Khan has repeatedly called for the world to engage with the Taliban’s interim government to stave off the possibility of a collapse of Afghan structures, in the absence of central bank funds.

An estimated $10bn in Afghan central bank funds remain frozen in foreign bank accounts, notably with the US Federal Reserve, following the Taliban’s takeover of the government a month ago.

On Monday, Pakistani Foreign Minister Shah Mahmood Qureshi reiterated a call for those funds to be unfrozen in order to allow the Afghan government’s institutions, including schools and hospitals, to function.

“On one hand, you’re raising fresh funds to avert a crisis, and on the other hand, money that is theirs belongs to them, they cannot use,” Qureshi told reporters in New York, where he is attending the UN General Assembly.

“I think freezing the assets is not helping the situation. I would strongly urge the powers that be that they should revisit that policy and think of an unfreeze,” he said. 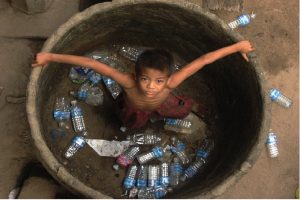 Pakistan was a key ally of the previous Taliban government in Afghanistan between 1996 and 2001, but has withheld recognition of the armed group’s new government in the country, with Pakistani leaders saying any decision on recognition would require regional consensus.

Khan, who recently attended a summit of regional countries as well as Russia and China under the aegis of the Shanghai Cooperation Organization (SCO), said that recognition would depend on three factors.

“All of us (in the SCO) decided that we would collectively take a decision to recognize Afghanistan, and that decision will depend on will they have an inclusive government, their assurance of human rights, and that Afghan soil should not be used for terrorism, and neighbors are the most worried about that,” he said in the BBC interview on Tuesday.

The Taliban has come under fire in recent days for the structure of their interim government, with no women included in their cabinet of ministers or deputy ministers.

Khan said Pakistan would push the Taliban to form a politically and ethnically inclusive government, “because there will not be any long term sustainable peace or stability unless all the factions, all the ethnic groups, are represented”.