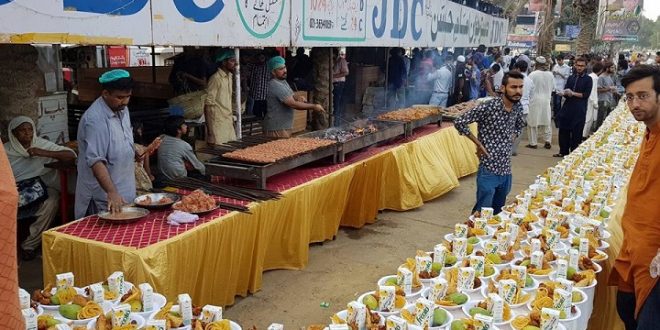 There are some views and brief conclusion of world most famous Pakistani philanthropist Syed Zafar Abbas Jafri, who also known as the best organizer of public events especially  the highly respectable arrangements of community kitchens where a free meal is served to all the visitors, without distinction of religion, caste, gender, economic status or ethnicity.

Zafar is also one of the students of Karachi who established Jafaria Disaster Management Cell (JDC) a Welfare and Non-Governmental Organization (NGO) commonly known as JDC Welfare Organization in 2009.

Not only the thousands of people whether they are Pakistani-born Australians, Americans, Britishers, Canadians, Africans, Scandinavians, Arabs or have any cast, create, religion and culture from all over the world but also dozens of national and international organizations, forums, media outlets as well as individuals and groups have started to acknowledge and recognize the contribution of Zafar for humanity.

International Human Rights Commission (IHRC) has recently published a detailed report regarding his exemplary role and JDC’s contribution to millions of masses.

Despite all type of fears, severe life-threatening and other relevant aspects, Zafar always keeps continuing his work along with his entire team round the clock while in Pakistan, the violence against social workers has become an inherent risk of the profession and undeniably one that needs to be addressed on a national scope. Social workers are frequently sent alone and unarmed to dangerous situations in neighbourhoods that police do not enter without a partner and a gun. Social workers stage life-changing interventions daily, but what measures are being taken to ensure their safety?

A large number of Pakistanis those living in Australia, New Zealand, America, Britain, Canada and other countries have stipulated again federal and provincial governments as well as all Law Enforcing Agencies to provide foolproof security to Zafar Abbas according to the directions of the Supreme Court of Pakistan (SCP) issued in April last year in which the SCP directed the top provincial police officials to ensure the provision of security to all those who face genuine security threats. They are already anxious regarding the decision of SCP against the encroachment case which issued a couple of months ago.

Meanwhile, the defunct groups have already been informed print and electronic media that if they publish or on-air any news regarding Zafar as well as JDC’s activities especially about the arrangements of public kitchens (Dastarkhawn-e-Imam Hassan-AS), they will have to face severe consequences while the concerned journalists would be punished as per laws prepared by Daesh in March 2015.