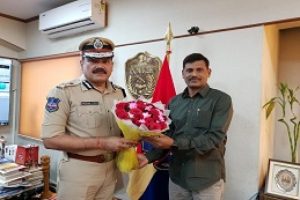 Hyderabad, Aug.13 (PMI): The Union Ministry of Home affairs on Wednesday announced award of Union Home Minister’s Medal for excellence in investigation for the year-2019 to S. Mohan Kumar, ACP of Special Branch, South zone, Hyderabad.
In this regard, Commissioner of Police Anjani Kumar congratulated S. Mohan Kumar. While he was working in Punjagutta PS as SHO, he investigated a sensational murder case where in five accused persons had brutally killed one person in the month of July, 2015. He investigated the murder case and filed charge-sheet before the court and after examining the witnesses, the court awarded five years imprisonment for all the five accused.
Apart from this case, he also investigated a rape case in 2016 and filed charge-sheet before the  court. In this case also, the court convicted the accused for 10 years rigorous imprisonment. S. Mohan Kumar is one among two officers, who have been rewarded from Telangana State. (PMI)