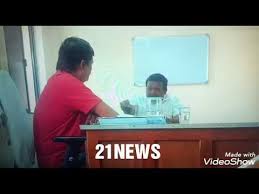 Hyderabad, Nov.7 (PMI): The sleuths of Anti-Corruption Bureau (ACB) on Thursday caught red-handed A. Ravi Kumar, District Panchayath Officer, Medchal-Malkajgiri district, when he demanded and accepted a bribe of Rs. 1 lakh from Eshwaraiah, former Sarpanch of Gundlapochampally for preparing an audit report in his  favour.
The trap was laid at Kumar’s office in Keesara Collectorate office.  It is said that the Officer demanded Rs.five lakhs, and was caught while accepting Rs.one lakh, as part of the deal.