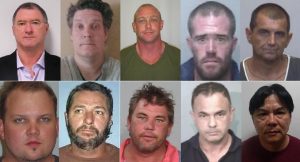 SYDNEY: “Dozens of Muslims representatives across the world have warned all Islamophobians to change their mindset not only against Islam but also Muslims and change their lives according to their own religion otherwise either they would have to face severe consequences or convert their beliefs as designed by Islam.”

“They also informed all ‘anti-Muslims forces’ as well as ‘world authorities’ that if the attitude and behaviour will not be changed against peaceful especially oppressed Muslims the third and final world war may be started which definitely would destroy the whole humankind and nothing will remain on earth.”

Talking to the Messenger most prominent Muslims leaders said; what a mockery has become the routine of the world especially of Aussies that Australia’s all most wanted persons are not only non-Muslims but also most of them are ‘whites’ but the Muslims declare terrorists worldwide?

A Roll Call of killers, rapists, fraudsters, drug traffickers and armed robbers have revealed Australia’s most wanted criminals, including a “master of disguise”.

Among those featured on the 2018 list is Australia’s most wanted man and “master of disguise”, Graham Gene Potter, who was convicted of decapitating a woman on his buck’s night in 1981 and charged with additional counts of conspiracy to murder two men in 2008. He is one of many fugitives who police believe are “living among everyday Australians”.

An Australia’s present ruler on anonymity condition confirmed the claims of sources which were disclosed to Messenger that a large number of terrorists have not only reached in Australia but all are busy according to their plan countrywide particularly in Melbourne and Sydney’s areas and world may see their acts in the months of May and June because they have a plan to show some trailers just to check and evaluate the weight of government as well as security agencies.

It is worth mentioning here just to maintain its past record as well as for future the record that Messenger was predicted as claimed by sources regarding the tips of terror attacks in Australia have been a hundred percent found correct with all sensitivities of dates, times, locations and events but neither the country’s agencies gave the weight to Messenger’s news nor the former and present governments considered them.

During the current year’s first week of May and the second or the third week of June, some big terror bids can take place in Melbourne and Sydney.

Responding to a question sources revealed that in Melbourne’s Fawkner area while Surry Hills and Balmain areas of Sydney on the hit list of terrorists, sources finished.