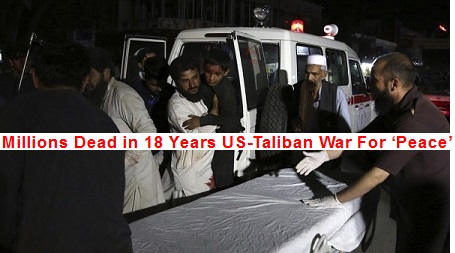 3rd attack in Afghanistan during 6 days 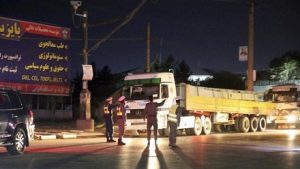 KABUL/ ISLAMABAD: Third attack in Afghanistan during last six days claims several casualties while the negotiations are underway between Americans, Afghanistan and Taliban through a most secret Pakistan’s arbitration and some Indo-Pak influential journalists and Shia priests not only in Doha, Qatar but in all four involved countries’ hidden places to end the 18 years continued US-Taliban war; sources claimed.

Sources further reveled that after expelling ‘this correspondent’ among five other most significant and forceful Shia journalists and priests on non-participation of Afghan women in negotiations on specific directions of Kingdom of Saudi Arabia (KSA) and one of dangerous Pakistani tribal groups, neither the peace negotiations could be resulted successive nor the not only the ban on those ‘arbitrators’ would be removed and the death warrants may be quashed against those journalists and priests yet. 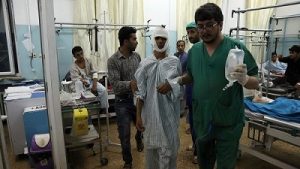 According to a report as many as five people have been killed after a massive explosion from a suicide car bomb attack rocked central Kabul, during the third attack claimed by the Taliban in as many days in the country.

Because of this unpublished secrets and chronological realities, neither ‘this correspondent’ (SJA Jafri) nor his media website (PMI) wanted to flash this report due to their own involvement but when the sources insisted and convinced that neither non of one media outlet across the world will publish these details nor these information will become the part of historical record then after a long discussions, debates and considerations, the editorial board decided to highlight this news byline.

Taliban spokesperson Zabihullah Mujahid said a coordinated attack with a suicide bomber and gunmen was under way.

The attack took place while Afghanistan’s main TV station Tolo News aired an interview with the US envoy Zalmay Khalilzad, who was discussing a potential deal with the Taliban that would see the US withdraw forces from five bases across Afghanistan.

Gunfire could be heard in the aftermath of the blast along with a secondary explosion when a nearby petrol station caught fire, sending plumes of smoke into the night sky.
“Five bodies and 50 wounded – all civilians – have so far been evacuated from the area,” Rahimi said, noting the toll could rise. 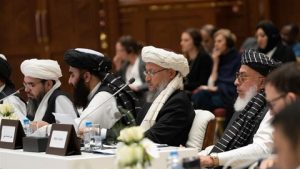 Ahmad Qadir, a gatekeeper at a petrol station near the Green Village, was on duty when he saw a flame and then heard the blast.

“After the explosion, we could hear gunfire,” Qadir told media.

Gula Jan, a police official, survived the blast despite being just  “15-20 feet away”.

“We were sitting in our police truck to the right of the compound’s gate when a car drove directly into the gate and exploded. If we had been outside our truck, we would be dead,” the 45-year-old told media

“At least two or three of my fellow police officers were severely injured and we have no idea how many more are killed and wounded. 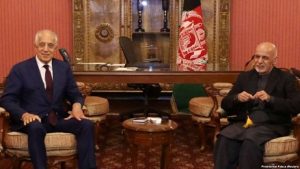 “I was told by my colleague that several gunmen entered the compound after the explosion.”

Khyn Noor, an 18-year-old truck driver, said he rushed to the compound with his brother after receiving calls that his friends and family members who are also truck drivers were injured in the blast.

“We’re here at this petrol station,” he told media. “We don’t know who is dead or alive.”

An intelligence official who works near the compound and spoke to Al Jazeera on the condition of anonymity said he heard a “massive explosion” and rushed to the scene.

“When we arrived, we saw Afghan special forces rushing in on trucks,” the official said. “We had to leave the area because we couldn’t breathe due to the toxic fumes of whatever was used to blow up the compound gate.”

The Green Village has been a frequent target of attacks. 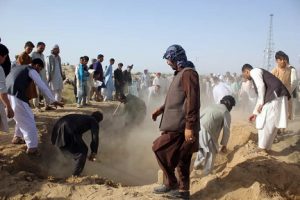 Many foreigners live in the compound, which is heavily guarded by Afghan forces and private security guards.

The area was targeted by a suicide car bomber in January who killed at least four people and wounded dozens.

On Sunday, a second attack by the Taliban in as many days left several civilians and security forces dead.

A day earlier, hundreds of its fighters overran parts of Kunduz, a strategic city and the capital of the eponymous province that the group has twice come close to taking in recent years. 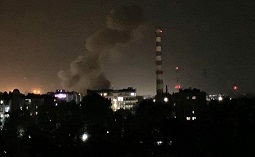 On Monday, attacks were also ongoing in the provinces of Kunduz, Takhar, Badakhshan, Balkh, Farah and Herat, according to Afghan local media. The Kabul-Baghlan and Baghlan-Kunduz highways were also blocked.

The escalating violence has overshadowed expectations over a peace deal between the Taliban and the United States aimed at ending 18 years of war.