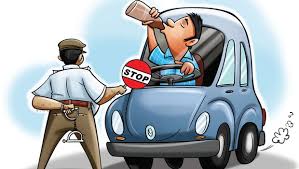 Hyderabad,  Thirty-nine persons were sentenced to imprisonment by the III and IV Metropolitan Magistrate, Erramanzil today on the charge of drunk and driving vehicles. They were sent to Chanchalguda Jail. The Magistrate also ordered permanent cancellation of driving licence of one offender and suspended licences of three others. All the convicts were ordered to pay fine of Rs 70,91,00.

Police said they have charge sheeted 329 persons from November 27 to December 1 for drunken driving and produced them in the Court on Saturday. Police said those who were caught and convicted in drunken drive cases, would face difficulties in getting government jobs, passport and visa clearance. The offenders would be sent for counseling at TTI. Goshamahal and Begumpet. The drive against drunken drivers was being continued to curb Traffic violations and also for safety of commuters on the roads, the police added.